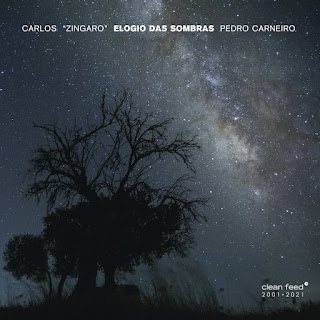 In August 2012 I was in Lisbon attending Jazz em Agosto. In the days between the two main weekend segments, the festival moved from its usual lush park setting to the Teatro do Bairro a black box theatre in the hilly, winding streets of the Bairro Alto for more intimate performances, among them (pardon the self-quotation) “Nuova Camerata…a recently formed, Lisbon-based quintet that matches the sonic and harmonic vocabulary of mid-twentieth century European formal music—Messiaen, Boulez—with the methodology of improvisation. Veteran violinist Carlos “Zíngaro” is adept at spontaneously generating music that sounds uncannily like the advanced mathematics of serialism, while classical percussionist Pedro Carneiro, a newcomer to improvisation, is possessed of very quick ears as well as hands.” (New York City Jazz Record, Sept. 2012, p. 58)

Sending me on this search through my files were the credits on this CD. While Carneiro has become far more active in improvised music in recent years, including duet CDs with pianist Rodrigo Pinheiro and percussionist Pedro Melo Alves (each reviewed on this site this past July), these duets were recorded in Lisbon in September 2012, just weeks after the Nuovo Camerata performance. While Carneiro’s recent improvised work adds a quarter-tone extension to his orchestral marimba, this earlier work specifies only a damper pedal.

Curated and edited by Melo Alves, this is stunning work. Originally recorded over two days, it feels like a continuous improvised suite, textures, figures and techniques accumulating in ways that fill the work with resonant and reflective suggestions and echos, from the opening harmonic gauze and industrial knocks of “Ar” and the skittering “Inicio” to the ultimate play of “Obscuridade”.

“Vestigio”, the title perhaps suggestive of something hanging over, is work of the highest formal tension, with Carneiro’s shifting tremolos tethering “Zingaro’s” spiky, high-tension lines. “Traço” exchanges the Boulez-like tension for an intense lyricism. “Luminescência”, suggestive of a midnight garden, is highlighted by the violinist’s pitch-mutating high harmonics, alternatingly muted and filled with an icy treble brightness and the light scraping and echoing liquid hollows of Carneiro’s expansive percussive resource.

“Luz”, evidently concerned with higher light levels, presses the sense of a rich formal inheritance and a kind of telepathic response to nuance with the concomitant possibilities for development and expansion. If “Zingaro” often seems to take the lead here, there’s also a sense of Carneiro taking the violinist’s materials, reshaping them and handing them back in the ebb and flow of the work. Among the mysteries of this “Praise of shadows”, the concluding “Obscuridade” is scintillating, playful, light and ebullient by its conclusion, hardly an “obscurity” at all.