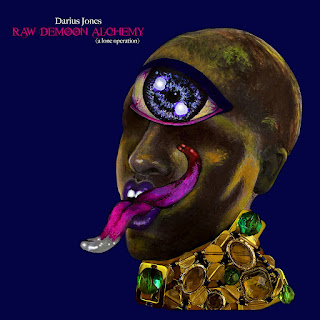 Free jazz has always been dynamic music, reinventing itself again and again by docking onto all kinds of different genres. Sometimes this may sound exciting, but sometimes it comes across as a bit too hail-fellow-well-met. Darius Jones certainly can't be accused of this, even if he has continually tried to build bridges to modernity, but always on the basis of his outstanding craftsmanship, his sensitive musicality, and in awareness of the history of jazz. In doing so, his music swings, he does not shy away from melodies, yet never loses itself in comfortable structures. This can be heard on his quartet album Book of Mae'bul (2012) or on his trio recording Man’ish Boy (2009). The basis of his music are blues and gospel on the one hand, on the other hand he consistently abstracts these forms. The great emotionality and the beautiful mess that dominate his style are foiled by the enormous ease with which everything is played. Repetition and silence are basic elements of Jones’s music, sometimes he plays one note for minutes and the rest of the band revolves around the eye of the hurricane - something he practiced at the Visions Festival 2019 with his marvelous quintet consisting of Craig Weinrib (drums), Dezron Douglas (bass), Charlie Looker (guitar) and Michael Vatcher (percussion).

It might be a surprise that the 43-year-old alto saxophonist’s latest album, Raw Demoon Alchemy (A Lone Operation), is his first solo recording. As if under a microscope, all the above-mentioned ingredients are on display. Jones communes with his influences: for three of the five tracks he chose compositions by artists who unmistakably part of the African-American free jazz hall of fame - Sun Ra, Ornette Coleman and Roscoe Mitchell. Jones’s version of Ornette's 'Sadness' plays with long pauses, the lines seem almost isolated from each other, the horror of this sadness seems almost essential. What we witness here is a merciless self-revelation, for shortly before he went on tour, Jones and his partner had separated after a ten-year-relationship. He shows the extreme pain of separation in the abrupt outcries that repeatedly cut his playing, in the reverbs and the murmurs in the low ends.

However, Raw Demoon Alchemy reminds us that the sorrow of splitting up can’t be defined by one emotion: Rather, its components are various, misleading, and sometimes even confusing. The blues feeling and the melancholy of 'Sadness' are confronted with the relative beauty of Victor Young’s 'Beautiful Love', but also with the stubbornness of Roscoe Mitchell’s 'Nonaah', the mother of all repetitive free jazz improvisations. Like Mitchell Jones plays angular short phrases that cross the entire range of the alto saxophone, but he only gives us an idea of the original track by even deconstructing it further. Actually Jones plays isolated single notes that seem to be cut off from Mitchell’s nine-tone-head. Only at the end of his version he arrives at a faithful rendition of the original. Actually, he turns the original upside down.

In the bouncer, Sun Ra’s 'Love In Outer Space', Jones focuses on sound possibilities of a saxophone, using vibrato, extreme overblowing and multiphonics as a stylistic devices. By doing this, however, we become aware of one last emotion: hope. In former times hope was considered as one of the most fundamental of all the emotions and Jones underlines that by the cornucopia of sounds the track offers. Using such a sparkling, yet dry palette, Raw Demoon Alchemy makes us question if emotion, after all, lies in the ear of the listener. If you know the conditions under which Jones has played this music, we expect him to mourn consequently. Instead, if you listen to the last minute of 'Love In Outer Space', the joyful melody gives us a hint that he’s slowly recovering.

One of the best albums this year.

Raw Demoon Alchemy (A Lone Operation) is available as a download, on CD and on vinyl.

You can listen to two tracks and buy the album here:

Excellent review of a great album!