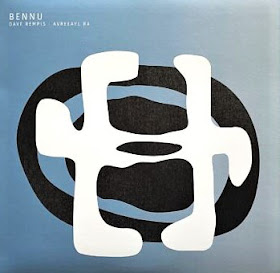 Reading about Bennu on the Aerophonic Recods site, there’s this, full of symbolism, phrase “out of nothing, something” which (don’t want to spoil anything, you can read the whole thing there), in a few words implies how out of the stillness of Covid dystopia, Bennu was produced. That is true in fact but I would rather disagree about this stillness, a void maybe, of nothing. Forged alliances, networks of people worked and stayed strong in many ways during those hard times for all us of who do not belong in the financial elite of this world.

One of those ongoing relationships is this between Dave Rempis (here on tenor and alto sax) and Avreeayl Ra (on drums, percussion and vocals) who have been working together in different formations, in and out, for over a decade now. Thinking about that, their mutual and shared experiences as musicians is when this “nothing” materializes more. We might be thankful of the internet and the choices it provides but it can’t offer the pragmatic possibilities of the face to face, real time meetings and exchanges of humans.

Having played together and recorded, plus the need for all these that the current situation has taken away, make Bennu crucial and quite edgy. Slowly building from the first bluesy notes of Rempis’ sax on the first track, 'Persea,' through the different, out of the blue, climaxes on all three tracks of this vinyl only release, up to the rhythmic barrage of the final track, 'Divisions of Time,' it seemed to me that the thread of all this was, “let’s play freely together and see where that takes us”.

Having listened to a lot of Rempis’s and Aerophonic’s recordings, I must admit that Bennu seems it has delved into Coltranesque territory more than anything else before it, especially the one covered through iconic releases like Interstellar Space. All three tracks are full of surprises. Melody and a direct relation to free jazz’s tradition has its place, but at the same time Ra sounds like a polymath of rhythmic of rhythmic diversities. A propeller of newly discovered drum sounds that the sax has to follow, compete or relate. And it does actually.

Rempis has, by now, worked with so many people of the highest order in contemporary free jazz and improv fields (and I’m not talking about technically per se, but mostly those who risk pushing the envelope a bit further). The experience and willingness to try out more, makes him quite able to follow the path opened by Ra’s playing.

Bennu is worth every cent you will pay and you can read and buy it here: https://aerophonicrecords.com/bennu/