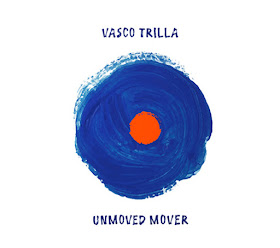 Unmoved Mover is a 2021 release from Portuguese/Catalan percussionist, Vasco Trilla. The opening track, Unmoved Mover, begins with a hand-crank siren with its own charming internal rattle. This gives way to a single strike of a tam tam augmented with a sympathetic vibrator, likely a piece of chain, that is soon followed by clock chimes sitting on a timpano head; the chimes are slowly struck, allowing the sympathetic resonance of the timpano to shine through. The tam tam returns, followed by a return of the clock chimes, this time bowed and then actively struck with metal beaters. The track concludes with a third and final strike of the rattling tam tam. This track introduces many of the instruments and techniques that will appear on the album in a demonstration-like way; the music unfolds in a slow, linear way, giving a sense of unmoving movement and allowing the listener to appreciate the unique, complex timbres of each instrument as they appear.

A novel activation technique of vibrators is utilized on several tracks, including: Hylomorphism (vibrators on timpano), Living Bodies (vibrators placed in disassembled chromatic bell-tree bells), and Nous, where surprisingly intense, frightening textures are built from this technique and the sounds of instruments are made more complex from the buzzing activation/interaction.

Each of the eight tracks comprising the 40’28” album appear to have a specifically selected instrumentarium, focused concept, and structure (or form of development) that comprises the unique musical identity of each track. There is a sense that this is a collection of planned improvisations, or open compositions that utilize improvisation to a large degree to generate the musical content. In short, these tracks seem that they could be iterated and maintain their unique identities as pieces of process music where Trillo focuses on certain techniques, timbres, and/or concepts for each one.

A common and notable feature of all the tracks is the use of the timpano as a table where other objects are placed. While the timpano is used as a sound producing instrument itself, activated with a vibrator or with friction from a superball mallet, it more often functions as an amplifier and acoustic filter of the objects placed on it, amplifying odd harmonics, adding complexity to already exotic timbres and often pitch-bending resonance. Another unique feature of several tracks is the use of objects to play themselves or each other, for example Living Bodies utilizes the dropping of bells on the timpano to activate it in jittery rhythms, these bells then continue their movement knocking into each other and “playing themselves” in a jangling clamor. A similar self-activation of the clock chimes occurs at points too, where the long, thin chime rods move and knock into each other, generating waves of flickering metallic rain.

For those unfamiliar with, or unsure of, pure percussion music, Unmoved Mover will invite them into this sound world and provide an accessible, intriguing, and fascinating introduction. For those already familiar, Unmoved Mover offers a refreshing, focused collection of percussion music that is definitely worth a listen or two, or many more!