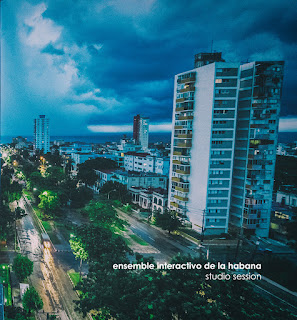 The instrumentation is unlisted but I think I hear at least guitar, violin, flute, clarinet, voice, percussion, and piano, all of which exude vibrant personalities even in moments of slower tempo, lower volume, and generous space. It is a beat-conscious music in which instruments appear to pass the pulse amongst each other, dividing and subdividing it and subtly shifting it to compliment the spaces unoccupied by others and to together form a living rhythm with constant momentum. Three times they seamlessly coalesce into bustling but not overcrowded peaks in density, dynamics, and tempo - winds weaving ascending and plunging with a backbeat of swinging piano and romping percussion - acrobatic drum fills and some psychedelic plucked string - a kind of conga piano rhythm intersected with a fiddle melody and winds like screech owls in call and response. But despite these lusty grooves’ conspicuous energy most of the time is spent in simmering moments still propulsive but more expansive in color. Chiming bells. Droning voice. Interweaving lamellophones. Some extended techniques like air notes, key clicks, and fluted cymbals. And other textural explorations while the beat subsists. Throughout it is infectiously fun.