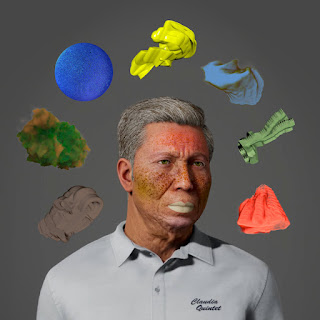 There are two kinds of people in this world: those who like accordion in their music, and those who don't. This album is for the first kind! If I weren't kidding, you might call me strange, but I'd still be a huge fan of The Claudia Quintet. On the ensemble’s ninth album, Evidence-based (Flexatonic Records, 2021), John Hollenbeck helms the composition, drums, percussion, and electronics; Chris Speed plays clarinet and tenor sax; Red Wierenga performs accordion and electronics; Matt Moran is on vibraphone; Drew Gress plays bass and electronics. The special guest on the album is poet Eileen Myles, and they contribute “talk.” Due to pandemic conditions, all artists were recorded separately in discrete locations.

The seeds of this album were planted in 2017, as Hollenbeck was digesting news about the U.S. Centers for Disease Control and Prevention (CDC) apparently “banning” usage of certain words in its publications. It turned out to be more official discouragement than outright banning, but the restrictions extended to terms that carry implications for specific peoples – words like, “fetus,” “diversity,” and “transgender.” It also included words that relate to how we determine facts and truth – like “science-based” and “evidence-based.” Throughout history, much has been written about the relationship between language and power. About the decision to explore politics in his art, Hollenbeck says, “I'm not in a vacuum. I'm hearing all the news everyone else is hearing. Then I go into the practice room or the composing room and it's not like that stuff goes away."

Yet confronting socio-political issues doesn’t dominate the music, and when Eileen Myles’ vocals do deal with issues, instead of being divisive, they’re inquisitive. Furthermore, they exhibit a peculiar combination of qualities: spoken manner-of-fact, like talking to a friend; often self-assured, yet not insistent, but instead searching. Their “talks” sometimes preface a song, but not in an overbearing or deterministic way. At the same time, what they say and how they say it definitely interacts with the music in manners both deep and playful. Myles’ talks exhibit a juxtaposition between common, everyday language delivered with an almost neighborly affect, and an assembly of words and phrases cast in abstract and non sequitur forms that evade clear meaning. They invite the listener’s attention without holding it captive, in a way that really compliments and enhances The Claudia Quintet’s distinct amalgamation of styles – music that is richly complex in composition, cradled in affable groove and harmony.

“Fetus” stands out for being rather different from other tracks. The listener first hears what sounds like a solitary marble rolling round-and-round, soon enveloped in a heavy womb of undulating, pulsating, amorphous low register notes and chords. There’s a palpable darkness, yet also a buoyancy that feels hopeful. Towards the end, Myles voices a curious existential perspective: “I’m not used to being thought of, you know?”

Many of the tracks spend significant time conveying the consistently beautiful and interesting compositions of Hollenbeck, with brief solos used judiciously to enhance and transition. “Diversity” is a celebration song, with the joyous polyrhythmic theme first played on drums and cymbals before being echoed by clarinet and accordion. Myles seems to patch together fragments of phrases culled from a variety of dialogues, producing an abstract verbal quilt, and wonders, “Is this possible for you?” The band is grooving hard behind Speed’s insistent sax solo, similar to a moment during the title track “Evidence-based,” which is full of fun: drum-accordion duets, angular melodies, double-time rock feels.

“I feel like I was cut out for this line of work / I realize this is not an interview / but I just need to say what I got.” Myles playfully prefaces “Nice Tune,” a boisterous number that showcases deft solos from vibes, clarinet, and accordion, nestled in a positively danceable vamp. Here’s a video for “Nice Tune” that gives a sense for how the songs were recorded. Claudia Quintet "NICE TUNE" 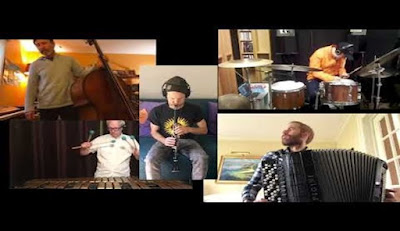 To my ears, this is an album of fun and fascinating compositions that simultaneously seizes the opportunity to invite awareness and consideration of very serious issues about culture, power, and truth. And as commitment to that important consideration, a portion of all album sales are donated to Black Lives Matter initiatives. Evidence-based is available for digital download.
Paul on Sunday, December 19, 2021
Share

A story about Thelonious Monk. A student disc jockey was announcing a forthcoming Monk concert and said (I think appreciation) that Monk played all the wrong notes. A few minutes later the phone rang. It was Monk. "There are no wrong notes on a piano!" I hope the story is true. I am pretty sure, having followed this blog for a year, that there are no wrong instruments.

Following up on Ken Blanchard's comment that there are no wrong instruments, I give you "Anthony Braxton: 10 Solo Bagpipe Compositions".