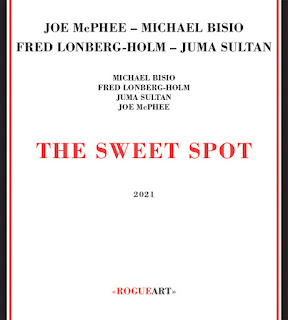 In January 2021, four musicians came together to record for RogueArt. The session was made to happen when Michael Bisio contacted Michel Dorbon of the label and asked if they could somehow manage to get the quartet of saxophonist Joe McPhee, bassist Michael Bisio, drummer Juma Sultan and ‘cellist Fred Lonberg-Holm together – and it happened. The album was released in November 2021 and though it took patience and fortitude to bring the four musicians together during a pandemic, it was worth it.

‘Malachai’ opens this album in the spontaneous, free playing style which is to be expected from such a foursome. The track includes some delicate, frivolous escapades where the musicians delight in reflecting and re-inventing phrases, the strings of the ‘cello and bass creating both percussive lines and deep, melodious bowed interludes. McPhee rifts in on sax and creates visceral sounds, ranging from sharp clashes to more sonic interludes. There are some really beautiful moments when the deep lustrous voice of the bass entwines with the upper notes of the sax and grounds it. McPhee plays with a 3-note motif for a while before blending screaming with the sax notes, the voice becoming more sonic than the reeds momentarily before he returns to gentler tones, and then a quiet descends where the cello is heard in arco over the bass and all is at peace once more. Until ‘AMS’ starts and now we are tripping in different tempos, thwarted from following a single line by the changes introduced be each player, seemingly following their own line yet somehow anchoring around the pivotal central notes of the key – very clever and completely intuitive.

‘Free3’ is a beautiful track, with the ‘cello marking out the slightly crazed introduction, which is highlighted against the bass until it descends and settles on a grinding single note bowed tangent, over which the bass weaves, before the pair join in a rise and fall duet with crashing discordant beauty. The track is a wonderful interaction of the two musicians and their instruments.

‘Human Being’ begins with the bass setting out a melodious section on plucked strings before percussive elements join and there follows a reflective and quite beautiful demonstrations of percussion and bass interaction, over which the arco ‘cello weaves a melody and the sax counters that with some challenging melodies of its own. I am not saying the sax almost ruined a gorgeous interlude but …. Yet, the harshness of the sax later counteracts the melody and enhances it, redeeming itself and McPhee somewhat. The bass finished the track with some beautifully worked lines.

‘e320’ begins with creaky, stressed strings with warping bass and cello taking turns with owed and pizzicato lines. The cello then warps low before rising with the bass and drums in apparently conversation, the three setting up a swinging, rhythmic section, over which the sax sings and sighs in almost perfect opposition. The ‘cello on this track is outstanding as Holm exhibits his mastery of every part of the instrument’s capacity. Meanwhile the bass supports with a constant gait and the percussion too seems to understand the genius of support. The second half of the track belongs to the sax and ‘cello with McPhee adding breathy, uber intuitive expressive motifs across the top of the relentless rhythms of bass and drums, with ‘cello still in full display mode. A glorious track.

‘The Sweet Spot’ begins with vocals from McPhee over steady, rhythmic percussion. McPhee switches to sax and drops a melodic yet acidic line across the top of the drums and the cello rises in volume, with trilling strings, under which still another layer is provided by the bass which is steadily maintaining its stealthy but essential beat underneath it all. The entire ensemble adds to this track with inventive interludes, riffs, and explorative musical ideas.

‘For Django’ closes the album with some gorgeous melodic playing, alongside some equally beautiful anarchy, which serves to demonstrate the listening and improvisational skills of each musician as the track develops its own timescale and rhythm patterns. A gorgeous way to end an album which has something of the meant to happen about it.

The four musicians play together as a quartet and the desire to come together and play as precipitated by events which enabled them record this album, as each found a window at the same time.

Listening to this, you get a sense of healing in the music, not just because we are slowly emerging form a pandemic but because without playing together, musicians suffer in more ways than physical and the essence of need and desires met is almost palpable on this album. Aptly named, the music certainly hits the sweet spot on more than a few occasions. Good job.