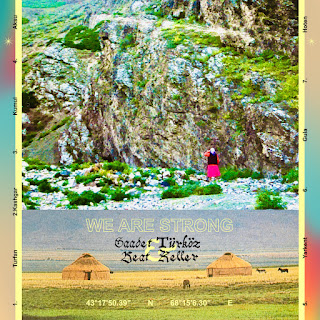 Saadet Türköz’s 2019 release with Elliot Sharp, Kumuska, has been a go-to listen for me as of late. Because of that, I was drawn to We are Strong, her recent collaboration with guitarist Beat Keller. As have many, this duo has turned to the cassette (with download) as their medium of choice.

Although I do not own a cassette player, nor do I intend to, I think this medium is important for the release. Many cassettes are EP length, or at least much shorter than the 70+ minutes that can be crammed onto a CD. We are Strong clocks in at a brief 21 minutes and 36 seconds. If one downloads the album, moreover, they get the benefit of the focus of a briefer release coupled with much better sound quality than a cassette can offer, especially as it warps over time. Then again, maybe that propensity to degrade is part of the strange appeal of the cassette to the growing ranks of millennials, or whomever, who consume them. Or maybe it reflects the theme of this album: the construction of hazy memories of a past both spatially and temporally removed.

Türköz was born in Istanbul to parents who had fled East Turkestan (the Xinjiang Uyghur Autonomous Region) in western China. Although she now resides in Switzerland, this familial history of forced migration and borderline exile has deeply influenced Türköz’s craft – exposing her to linguistic and folkloric traditions that span the Turkic, Arabic, and European worlds – and We are Strong in particular. Although this is abstract music, it carries heavy political weight. Each track bears the name of a city in eastern Turkestan. The title of the album, We are Strong, moreover, speaks not just to diasporic perseverance, but also the struggle to maintain a connection to the physical and cultural environs from which the subject is alienated. Indeed, Türköz claims her music strives to “transform memory,” to create and recreate, interpret and reinterpret those distant ties between lands, people, cultures, and migrations. This comes through in Türköz’s sometimes tortured, sometimes plaintive, and sometimes patient and soothing vocalizations against backdrops of tinny and disjointed guitar rummaging.

We are Strong consists of seven quick tracks, each of which is a statement in itself. The shortest lasts less than a minute and a half. The longest, just under four and a half. We are Strong is not nearly as sweeping as Kumuska is. It is, however, quite potent. Türköz seems to take the lead on most tracks. Keller’s glitchy fragments, however, push rather than shadow her. These interactions display not only how adaptive Keller’s fractured restrain can be, but also how versatile and unique Türköz’s Kazakh and Uyghur chants and avant-Turco-classical techniques really are.

We are Strong is an intimate album, and a deeply compelling one. The more I listen, the more dexterous but also determined Türköz sounds, and the more appropriate Keller’s pared down clangor seems. I am not sure whether 70 minutes of pieces this short and this disjointed (read as a metonym for the disjunction inherent in migration and especially forced migration, and maybe tape decay?) would hold up. However, it is perfect for an EP-length release like this. We are Strong ends too soon, but also before it starts to drag or become predictable. And in that, its pointed and poignant meditations on the plight of the Muslim population of Xinjiang , diasporic life, and, per Türköz and Keller themselves, universal human rights. That is a lofty agenda for a limited cassette release of such eccentric music, but a worthy one, and absolutely one worth exploring in all its minutia and de- and reconstructed memory.