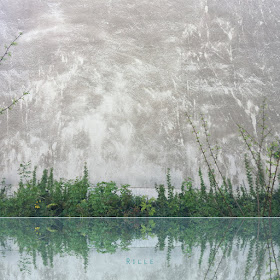 Allbee is a member of the Splitter Orchester and recent documents like Frost with Annette Krebs and Sven-Åke Johansson, Rhythm Complication with Burkhard Beins, Clayton Thomas, and others, or Salz with Ignaz Schick, Mike Majkowski, and Oliver Steidle showcase an uncanny ability to coax peculiar textures from the trumpet, particularly through breathplay and what sounds like the result of arcane embouchures. And these two elements - breath and the morphology of the mouth, which are also key to speech - seem to reflect an admitted fascination with the proto-linguistic qualities of musical voices (which might find conceptual companions in something like Zinc & Copper’s Words of Paradise or Nate Wooley’s Syllables Music ).

Rille is a rare solo release for Allbee and illustrates the synthesis of voice and electronics with trumpet in their practice. Which here might find a closer analog in something like Portishead or Tricky than any of the above context would suggest. The timbre of the trumpet appears in the bright but blue calls of “Walls & Windows” or the grainy strata of air notes in “Rille Estate” but is not readily identifiable elsewhere. More often tracks are layers of deep bass alternately droning and discrete, rumbling, buzzing, and throbbing, revving and whirring like a motor, sometimes stuttering and stumbling like deconstructed club music. With various accents of rolling-thunderesque sinestral piano clusters reverberating in decay, downtempo clicks and percussive soundings, electric chirping and cooing, bell tolls, whistles in arced trajectories, test tones and singing oscillations, recordings of birds and sirens. And a poetic text, half-sung, half-spoken, not always decipherable in its occasional murmuring or whispering but perhaps with a recurring motif of light in its various gradations and contexts, in windows, moon, and morning, in subterranean spaces and Kaspar Hauser’s darkened cell. This is not a silent music - tracks even appear to flow as if continuous despite appreciable silences separating them - but its theme of light, a property always present to a degree even in darkness, might draw comparison to the spectrum, rather than some binary threshold, of sounding and silence. Or maybe even a more psychological meaning, the creeping inertia of its tempi, restraint of its dynamics, and sometimes soured tones imparting a dark mood that permeates the music.