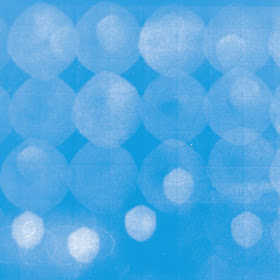 Mayas’ practice sounds the whole piano, inside and outside and with preparations and objects, expanding the expected sound of the piano into a significantly more expressive palette. In 2021, she has also released Spoken / Unspoken with Miako Klein and Biliana Voutchkova (a working group called Jane in Ether) and Confluence with her star-studded Filamental ensemble. And she helped organize and issue the first volume of Graphème , a print-periodical for contemporary graphic scores in the spirit of John Cage & Alison Knowles’ Notations and Theresa Sauer’s Notations 21 which among others features work from both Mayas and Douglas. Douglas’ practice is multi-faceted but Mayas illuminates a throughline in the liners, describing Douglas’ scores as sculptural and tactile. Mayas’ particularly textural practice seems well-suited to translating these more visual qualities into sound.

Clusters and individual keys glow in generous space, their decay reverberating and undulating, slowly forming gentle melodies with a comfort and warmth conveyed in the care of their sounding but the familiar sound of the piano is only a part of any moment. Strings are popped and plucked. Strummed disjointed and jangling like guitar chords in fragmented rhythm. And beyond guitar the piano appears to assume many other identities. The lateral motion of a spring. Circular lamellophone structures. The metallic swells and roars of bowed cymbal, sometimes beating. The more organic friction of bowed strings though perhaps with a bit more grit like the stroh. Some sustained whisper like a flute or reed. A melody box cranked too quickly. The stochastic twinkling of wind chimes. A stick skipped across fence pickets. The irregular cadence in the balancing act of digits bouncing among strings like a spider traversing its web. And in the moments with electric keyboard, in which the muted plunk of keys’ release can be heard, the textures can be closer to bells or vibraphone. The evocation of an unfolding and the wonder and enchantment felt in that kind of experience is present throughout but the various pieces shift the emphasis in subtle ways. “Sediment” feels slightly more volatile and propulsive, the attacks of its interventions often more sharp, abrupt. “Intersect” focuses on electric keyboards, their facsimiles of bells and mallet instruments lending a lullaby-like serenity in swaddling decay. The brief Point études appear to individually accentuate aspects of the single-performer symphony described above though with enough of everything else to flow cohesively, the points nearly a line.