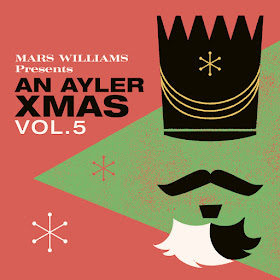 Almost all the music reviewed at this location is shifted toward the extraterrestrial end of the spectrum. Even when the instruments and notes are perfectly ordinary, the music is exploring some dimension of sound and texture that would be entirely alien to fans of more popular genres. To put it mildly, the first time I listened to Albert Ayler’s Spiritual Unity, I really felt like I wondered into the ghost realm.

For that reason, the title An Ayler Christmas initially struck me as somewhat less plausible than a musical version of Silence of the Lambs. After spending a bit of time with it, it still strikes me that way. That is not a criticism. You might fill the theater for at least five shows with readers and reviewers from this blog.

That, at least, is what Mars Williams seems to have accomplished. I am reviewing Vol. 5 of an Ayler Christmas here. I knew Williams’ sax best from his addition to the Ken Vandermark 5 (Target or Flag 1998, Single Piece Flow 1997). He is backed up by an excellent band, including Kent Kessler another Vandermark 5 veteran. Kessler’s double bass is one third of the DKV Trio (with Vandermark and Hamid Drake).

There are really rich veins of music being excavated here. Much of the music right off Ayler’s albums, almost note for note if memory serves. I would go so far as to say that, were it not for the better recording technology, I wouldn’t be sure that it wasn’t the man himself.

Track One, “The Divine Peacemaker Plays Dreidel In Frightful Weather,” joins Ayler’s “Divine Peacemaker” with “Let It Snow.” Williams likes to pour in a lot of sound, but he brilliantly places individual players in spaces of quiet and then blends in a complimentary instrument. In my favorite moment, Peter Maunu’s lovely violin gives us a bit of fragrant Christmas incense, with is following an instrument that struck as mostly bagpipe. The effect was stunning.

Many of Ayler’s compositions sound like they were performed before a large holiday gathering. “The Angels Sing with the New and Old Ghosts in the Manager” weaves Ayler spirits with traditional melodies “Hark the Herald Angels” and more modern samples such as “Feliz Navidad” into a tapestry that is beautiful to the ear and velvety to the touch. The sixteen-minute cut begins with an Ayleresque solo that sets just the perfect mood for the larger band to come in behind of. The energy constantly builds after that and doesn’t taper off until very near the end.

The exquisitely titled third cut “Did You Hear They Found Light In Darkness” begins with honest to God sleigh bells. A horn chorus follows and the crowd of merry makers lights up. Ayler’s “Light In Darkness” finds its perfect match in “Do You Hear What I hear?” The pace is builds a church around it, on Christmas eve.

I am not sure that this is what you want to play on Christmas morning with Grandparents in attendance. Unless, of course, your grandmother happens to be Patti Smith. But if you want to cut the Christmas cookie sweetness with some genuinely brilliant free jazz, this is your next cocktail.

If you are looking for something a little less demanding, I recommend a collection Jingle Bell Jazz. If you find the right one, it has the Dexter Gordon Quartet playing “Have Yourself a Merry Little Christmas.” Might be the most perfect cut he ever recorded. Meanwhile hunt down Mars Williams recordings. Something for the stocking.