Early one morning in 2020, free jazz saxophonist Peter Materna was composing music. Suddenly, the door opened. His wife entered the room. And she kissed him. The natural tenderness of that moment inspired an album brimming with raw intimacy and howling passion. It’s called The Kiss, and he recently performed songs from the album on stage for the first time. 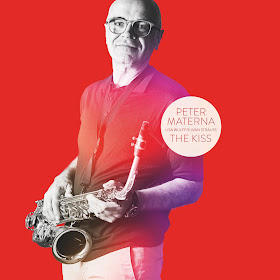 For the concert at the Jazz Schmiede in Düsseldorf on 19 November, Materna was joined by Duy Luong (bass) and Karl-Friedrich Degenhardt (drums). Materna has been recording and performing for thirty years. He also founded the Jazzfest Bonn in 2010 and is the festival’s Artistic Director. Luong and Degenhardt are young musicians – this was their first performance with Materna. They grabbed the chance to experiment, explore and explode together in a vibrant and heavily improvised show. “It was a very risk-friendly concert,” Materna said after the gig. “We’re musicians who want to try things out, take new paths and push each other to play notes you’d never normally dream of playing.”

The first sounds of the concert set the tone for a stormy and heavily charged evening. Degenhardt took an introductory drum solo full of ominous cloud and foreboding thundercrashes, beaters bouncing off the toms and cymbals screaming. Softly at first, Materna’s distinctive saxophone sound slithered into the gaps with the melody from Hymne, a repeating phrase with rising pitch that careens through the ozone layer and then arrows back down like a blazing comet. This was followed by Oxygen 2, where Materna switched from alto to soprano sax. Luong began pinging high notes on his bass, while the drums were zinging and the saxophone singing to create a panicky, shallow-breathing atmosphere.

With the audience cowering behind their physically-distanced seats, the trio changed the tone and moved the goalposts. A Blues is not in the key of A. It’s also entirely devoid of the sweet melancholy that characterises many of Materna’s compositions. Instead, it’s funky enough to have listeners reaching for their star-shaped sunglasses. For his bass solo, Luong tipped over the toybox and found a Hammond-Organ-y sound that warmed the room as if he’d poured molten caramel in through the roof. Degenhardt tossed the rhythm around like a rag doll – here a military cadence, there a soulful groove. And Materna puffed his chest out and slipped free from every structure his co-conspirators dared to set up. The audience cheered and whooped. The musicians grinned. “It’s so much fun when you don’t know what’s going to happen,” Materna announced. “Like a conversation with someone you thought you knew well.”

The show moved on to Wish You Were Here, a slow-paced bluesy shape with a sleek and slimy melody. Next came 343, a waltz for three musicians that was driven by Degenhardt’s skittering brushwork. The drummer opened up on Place to Be with a swaying, baying solo, endlessly stumbling from one beautiful idea to the next. The band then played the album’s title track, a sheet of tumbling sound like powdered snow slipping off a roof. Luong’s solo was punchy and precocious. Materna’s sax loose and lovelorn.

An album with multiple layers

The Kiss was recorded with Silvan Strauss on drums and Lisa Wulff on bass. “They leave a lot of space and put a sharp focus on groove,” Materna explained. “The gig in Düsseldorf was heavier, more crowded with ideas. But jazz is always different. If it was constricted by tight borders… it wouldn’t be jazz.”

The album stays in the memory for a long time, perhaps more like a first kiss than a familiar matrimonial smooch. But it’s a record with a deep spirit of celebration too. The presence-and-absence miracle of Wulff’s bass is pure joy. Strauss has a relentless, too-many-E-numbers style. Materna’s fuzzy, fizzing, buzzing, busy tone creates textures and temperatures that bring out the rich layers of his compositions. The record may be roomier than the concert at the Jazz Schmiede, but those open spaces unleash the life-force of exploration that is the beating heart of Materna’s music. If one kiss stirred that heart to produce such a moving and grooving album, it must have been a very good kiss indeed.

The Kiss is now available on CD and vinyl. Check out the preview video here:

Matty Bannond is a 36-year-old fiction writer, music writer and sports writer. He was born and raised near Manchester, UK. He now lives in Germany. Twitter: @MattyBannond