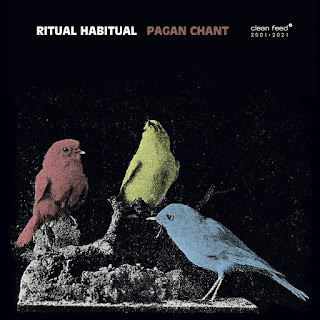 This is the first full-length release by this trio— an ep appeared in the fall of 2020 —made up of the Rotterdam-based Portuguese bassist Gonçalo Almeida, Riccardo Marogna, a native of Verona working mainly in The Hague, on tenor saxophone, bass clarinet, and synthesizers, and the German drummer Philipp Ernsting. The saxophone trio seems to be a favored format for Almeida, who has also played on, for instance, recordings with Ernsting and Hugo Costa ( reviewed for FJC by Stef Gijssels ) and Rodrigo Amato and Marco Franco ( reviewed by Eyal Hareuveni ). Marogna has appeared on a trio recording with guitarist Paul Brussò and percussionist Niccolò Romanin ( reviewed by Paul Acquaro ).

Citing Coltrane, Ayler, Cherry, and Haden as spiritual inspirations, this trio’s approach to jazz is certainly free. These tunes eschew traditional verse-chorus structure and, often, recognizable time signatures, but they do not seem to be entirely improvised—if they are, the telepathy on display is astonishing. Each unfolds in a distinct way while complementing the others. Notably, Marogna’s synthesizers appear only occasionally and never dominate the sound.

The titles of the songs indicate the theme, contextualizing the music as ecstatic and, well, ritualistic. The sequencing suggests a kind of diptych structure, with the murky and ambient “Psilocybe Cubensis” serving as the hinge between the two longer tracks of the first half and the three mid-length tracks of the second. The entire journey takes listeners from “The Womb” through to “The Eulogy.”

“The Womb,” the longest track, sets the stage with a slow opening of hesitant bass notes and hand percussion before the sax joins in. Gradually, as Ernsting moves to the drum kit, the three voices coalesce with increasing intensity before dissolving into the synthesized sounds that are more felt than heard in the first half of the track.

Having left the womb, the trio embarks on “Rite of Passage,” which also builds from percussion and bass but to different effect, with much more space in the sound. Marogna comes in this time with the bass clarinet, which blends seamlessly with Almeida’s rumbling strings and Ernsting’s tribal drumming to give the impression of powerful forward movement. Marogna produces a remarkable range of sounds from this instrument, suggesting at times a foghorn, a shofar, or a double aulos.

Following the hallucinatory “Psilocybe,” where Almeida’s bowing is on display, the title track, compact at around five minutes, starts with a solo by Marogna; his sax then becomes swathed in echo before dropping out to let the rhythm section guide the way to “Dionysus Carnival.” In this tune, over a thick layer of cymbals and rattling percussion, Almeida and Marogna weave a theme to which one can easily imagine worshippers of the Greek god engaged in orgiastic celebration.

“The Eulogy” brings the set to a satisfying conclusion. Once more, drums and bass establish a foundation before the sax enters, here invoking the spirit of Ayler especially strongly. By the end of the tune, the three are producing a maelstrom of sound but still manage to stop on a dime.

This recording, then, is a real pleasure, and not just for those who have developed a taste for the theoretically limited palate offered by the saxophone trio. Pagan Chant creates and sustains a sense of spirituality and adventure that invokes its acknowledged influences while mapping out fresh sonic territory.