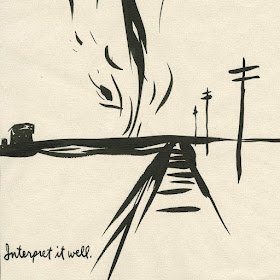 Drummers in jazz are like catchers in baseball. Have I said that before? If so, I just said it again. The catcher is the on-field manager because he is the only player who can see the entire field. In concert drummers tend to be positioned like catchers and because of the digital nature of the sound they are in a good position to watch the play of the other instruments. At any rate, I enjoy a lot of music directed by the percussionist. It’s even better when the guy with the mallets does vibes.

Ches Smith has a wider range of games to play than any baseball catcher. I reviewed his wonderful album Path of Seven Colors here. Interpret it well is something very different. Bill Frisell (guitar), Mat Manieri (viola) and Craig Taborn (piano) make for a powerful team.

The album is an interpretation of a drawing by Raymond Pettibon. It is the cover, naturally. Here is what the notes say:

“Interpret it well,” reads the script text in Raymond Pettibon’s mysteriously evocative drawing. A few thick black ink strokes describe an enigmatic landscape – the telephone poles, the railroad track and the building in the distance seem obvious enough as markers of desolation, but the swirl of lines on the horizon are more ambiguous. The steam from an approaching train? An oncoming tornado? Hope or dread, connection or destruction, all depend on interpretation”.

There’s some information for you. It helps. The first cut “Trapped,” begins with the piano sketching out and repeating a simple, five note theme. Just out of sight we get Smith’s vibraphone laying down more emotional depth. Strings put a right channel buzz to shape up the mood at the end. I need music like this.

The title cut is a masterpiece. I get the impression of slow-moving layers of vibrating, pulsing plates moving over one another. Little solos, especially the piano, carve out their space and then are surrounded by gentle splashes of color from the guitar and strings that grow into compelling grunts. Drums. And then a rock guitar crashes the party. All rides on pulsing theme that never relaxes. The music grows more intense and angry as the line split and recombine. The beat of the drum cuts the top of the music like a scalpel, but never the muscle.

Frisell’s guitar opens “Mixed metaphor” with a story-telling solo. Then we get a graphic lines of keyboard and viola plumbing the depths of the story. Listen to this, and try to figure out where the bottom is.

This album should be linked to any dictionary definition of the word “ring”. Or you could use it as the soundtrack for a travel video through some exotic landscape that reminds you of… something, you aren’t quite sure what.

This music is modestly minimalist, in the best possible way. I am going on a cruise soon. This is what I will listen to on a deck chair during one of our days at sea.