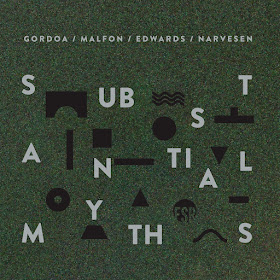 Among other projects, Gordoa and Narvesen have previously recorded together as part of the M0VE quintet, with Achim Kaufmann, Adam Pultz Melbye, and Harri Sjöström, which most recently released in Moers, as well as part of the Tutti Orchestra and its modular performances on the recent SoundScapes # 3 FESTIVAL MUNICH - 2021 SchwereReiter, both released by Fundacja Słuchaj too. And Malfon and Narvesen have released another set together from the same festival as this recording, with John Dikeman and Matthias Bauer, in live at artacts ‘19. But this is the first recording shared by Gordoa and Malfon or by Edwards and any of the other players.

They flow together through tempo, texture, and dynamics, stippling space together, trilling together, often one increasingly contrapuntal parameter ebbing the quartet towards the next movement, through the swells of louder faster frenzies and quiet textural intervals that these kinds of sets might tend towards. Though generally there is a driving momentum. Perhaps as anticipated from the instrumentation, when the quartet converges they can be a powerful rhythmic unit. Running basslines, sax duck honks, hundred-handed rolling thunder, and effervescent vibes; malleted celestial twinkle, spiderlike tightrope dances, and skittering shimmering cymbals and kick drum bombardments; wind chimes in tornado time and big bass bumps. But they implement the malleability of their instruments, and when the quartet converges they can conjure arresting harmonies. Stridulating saxophone squalls and overtone glints out of tremolos, plucked harmonics and sonorous big bass body bowed resonance, fluted metal and frictional skin, and oscillations ringing between long decay and bowed bars’ bells combine for revelatory euphony, sometimes sounding so pure as to have shed their timbral husks for a unified singing beating. Together they cultivate moments of shared clarity in what can seem otherwise an arcane chaos akin to an action painting.