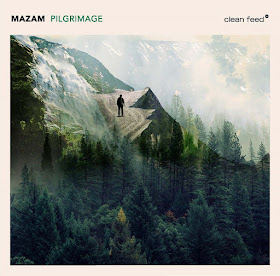 It’s difficult not to approach the second release from the Portuguese group Mazam from the perspective of the pandemic. The debut, Land (Porta Jazz, 2020), recorded in 2019 and released in March of the following year, is a spacious, sunny album that, like so many made around this time, was presumably unable to receive the initial support of a tour ( though there is some nice footage of a performance from last summer ). Pilgrimage, recorded in September 2020, when Covid cases were beginning to spike in Portugal , features shorter, knottier tunes, the difference between the sound of the two releases being well represented by the contrast between the bright colors of the cover art of the former and the dark and mysterious cover of the latter. Not that Pilgrimage sounds grim—the liner notes rightly point out a pervasive sense of playfulness—or, worse, dated. Rather, it documents a band on the move, and its considerable charms become especially evident in the context of its worthy predecessor.

The lineup remains unchanged, with João Mortágua on alto and soprano, Carlos Azevedo on piano, Miguel Ângelo on double bass, and Mário Costa on drums. While Mortágua is listed as the composer of the tunes on Land, those on Pilgrimage are credited to the group as a whole. All of these musicians are, naturally, involved in other projects (often with each other), but both recordings have the feel of a band that has devoted time to developing as a unit and embarking on “ an adventure through the lands of creative and improvised music .” In any case, the set offered here makes clear why these musicians are in such demand.

“Sinuous” starts things off with a ripple of piano and wash of cymbals soon joined by long sax tones but then, halfway through, comes nearly to a halt, meanders a bit, and then sputters out in cascades of piano and bowed bass. The somewhat unsettling effect is followed by four brief (under two-minute) improvisations during which the players seem to test the waters, or rather, in keeping with the overall theme, suggest ways forward. They find one on the title track, as blasts of sax combine with drum rolls, probing chords, and rumbling bass to lock in and Azevedo and Ângelo contribute a pair of compelling solos before the ensemble lurches to a halt. There follows a lovely quasi-ballad, “Pulley,” that is pulled along by Ângelo’s arco playing. Next, the brief, tentative “Day Dream” serves as a prelude to “Night Drive,” which opens with a drum solo and again features Ângelo prominently, this time, pizzicato; over the powerful rhythm section and Azevedo’s block chords, Mortágua wails and bleats in a real standout performance for the group. “Roundhouse,” another of the longer pieces, is more challenging, full of pent-up energy but resolving quietly. The journey ends with the longest of the tracks, “Hollow,” on which all four musicians have a chance to shine as tentative tapping builds gradually to an uplifting interplay that then cuts to a processed vocal chorus over which the saxophone floats, as if the pilgrimage has arrived at a monastery where the monks are chanting the Vespers. (There is a silence more than a minute before the chorus; while it is apparently intentional, elimination of it [e.g., using GarageBand] is recommended for repeated listening.)