Italian experimental electronic composer Luciano Berio's once said that “music is everything we listen to with the intention of listening to music. Everything can become music”. A few decades later electronics and noise wizards translate this wise observation into fascinating and apocalyptic sonic textures.

Peter Rehberg (aka Pita), the British-Austrian groundbreaking and underground electronic music player and one of the early proponents of the laptop as a music-making device, head of the influential Viennese Editions Mego label and the founder of the archival project of Groupe de Recherches Musicales (GRM, that released music by music by Bernard Parmegiani, Luc Ferrari, Iannis Xenakis and Beatriz Ferreyra, and a sub-label Portraits GRM that released new works by O’Rourke and Okkyung Lee), and a vinyl freak, died last July when he was only 53 years old. He may be known to the blog readers for his collaborations with Christian Fennesz and Jim O’Rourke (in the trio Fenn O’Berg), Oren Ambarchi, Keith Rowe, Otomo Yoshihide and Stephen O’Malley (in the duo KTL).

Needless to say, Rehberg's premature passing shocked many of his colleagues and collaborators. Top is a tribute to the great man and his unique creative personality by a few of his friends, erstwhile’s label head Jon Abbey, who released albums of Rehberg; noise meisters - Norwegian Lasse Marhaug, who designed and mastered a few of Editions Mego and GRM albums, and French Jérôme Noetinger, who collaborated with Rehberg in the leftfield electronics super-group MIMEO (Music In Movement Electronic Orchestra); German Marcus Schimckler, another member of MIMEO, mastered Top and many more of Editions Mego; and Austrian photographer and media artist Tina Frank, designed the cover art of Top as well as many albums of Rehberg.

Top was recorded remotely between September and November 2021 with Marhaug located in Sortland, beyond the Arctic circle, and Noetinger was in Rives in the south-eastern part of France. Marhaug noted that he and Noetinger wanted to be faithful to Rehberg’s qualities - his anti-musician approach (which often resulted in the most interesting music, just stripped of vanity) and his love for abrupt jump cuts and odd album sequencing, so he and Noetinger decided to capture the ideas in their raw state and trust in them. Marhaug used several old Macbooks, which all worked but had moody SuperCollider patches that only worked on these laptops (Rehberg himself stopped using these laptops when they became too stable and reliable for him). Noetinger added that he always thought of Rehberg as “a sort of ugly duckling who disrupts the established order only to reveal that he's much more than that, a genius of constantly evolving sound and limitless organization”.

Top is unpredictable and uncompromising, radical and unsentimental as Rehberg’s music was so often. Marhaug and Noetinger created ten pieces in which the noisy and seemingly chaotic sounds of old laptops, Revox tapes, modular synth and a CD player were arranged into intriguing textures that were often puzzling and punishing at the same time. These musicians suggest a wicked concept of rhythm, sliced and layered into sudden, urgent and stormy jump cuts (and the title of one of their pieces, “croissant with ham”, captures best this approach). They flirted with Rehberg’s improvisations with techno, noise and glitch elements, related to the times when Rehberg’s experimental music was filed in electronic dance music beans. But they also create music with an extremely physical presence, similar to the one that you may experience in free jazz or metal performances. The more you listen to this album you appreciate more the intricate, rhythmic-driven interplay of Marhaug and Noetinger and how they weave the weird and alien sounds into coherent textures. The last piece, “Trk3_GS_GO” is surprisingly emotional - obviously, in Rehberg’s terms - and sketches an icy drone spiced with distant feedback sounds. Its haunting sounds linger on long after Top ended. 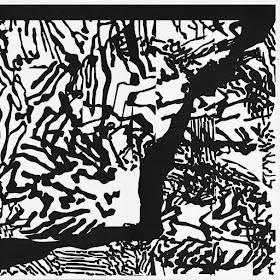 Maiandros documents Noetinger's first-ever live performance with fellow Swiss experimental electronics musicians- Antoine Chessex who plays the tenor saxophone, amplifier and electronics and Francisco Meirino who plays modular synth and micro-switch transducer (and later edited and mixed this performance), at Geneva’s Cave12 on October 28, 2020. On the same evening, France announced the first restrictions of the Covid-19 pandemic, and after this performance, the Cave12 and other cultural places in Switzerland were shut down for six months. The feeling of an unfathomable, coming global crisis informed the atmosphere of this unsettling, super intense performance.

Chessex, Meirino and Noetinger weave field recordings, urban and industrial sounds, white radio noises, cannibal Revox-ian magnetic tape, twisted and horrific sax chants, and processed and destructive synth sounds into unpredictable and unrecognizable, tsunami-like apocalyptic meditations. You can feel how the flow of the massive sonic waves becomes denser and the permanent tension becomes more tangible. But at the same time, this suggestive and often hallucinating music - especially in the second piece, “Tunnel” - has a firmer grasp on the listener. It is a perfect, immersive listening experience for the time when we were, and some still are, forced to succumb to isolation and silent surroundings.