Torben Snekkestad / Søren Kjærgaard - Another Way of the Heart (Trost, 2022) 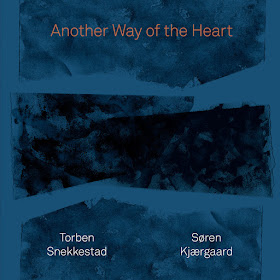 A few rare albums fit perfectly into your emotional state of mind and capture the fragility of our impermanent lives so beautifully as Another Way of the Heart by Norwegian reeds and trumpet player Torben Snekkestad and Danish pianist Søren Kjærgaard. Both Snekkestad and Kjærgaard were associated with the Danish label-musicians cooperative Ilk Music but, unfortunately, their discographies, especially in recent years, don’t match their great creative potential.

Snekkestad and Kjærgaard collaborated before in the trio The Living Room with Norwegian drummer Thomas Strønen and in an ad-hoc quintet of Danish drummer Peter Bruun (Unintended Consequences, Ilk, 2013). Snekkestad is also known for his collaborations with Evan Parker, Nate Wooley, Lotte Anker as well as his ongoing work with Barry Guy, in a duo, trio with pianist Agustí Fernández and in Guy’s Blue Shroud Ensemble. Kjærgaard led a much-acclaimed trio with double bass player Ben Street and drummer Andrew Cyrille. He is also known for his experimental projects with Danish poet-musician Torben Ulrich (also a filmmaker, a former professional tennis player and the father of Metallica drummer, Lars Ulrich). The titles of the pieces of Another Way of the Heart are taken from the third and last collaboration of Kjærgaard with Ulrich, Meridiana: Lines Toward A Non-local Alchemy (Escho, 2014), which was inspired by the different meanings and usages of meridians in Eastern (Daoist-alchemical) and Western (geo-navigational) traditions.

Another Way of the Heart was recorded in August 2021 at Ocean Sound Recording, Giske, Norway, a studio describing itself as located at “the end of the world, on the edge of the sea with a clearness provided by the open horizon”. This isolated studio with lodging services is a perfect place for reflection, meditation and subtle and intimate experiments with acoustic sounds. Snekkestad plays on tenor and soprano saxes, clarinet and trumpet and Kjærgaard on a grand piano.

The poetic and enigmatic titles of the 12 concise pieces, all credited to Snekkestad and Kjærgaard, capture faithfully the reserved, patient and calm dynamics of Snekkestad and Kjærgaard. They need no more than a few delicate and minimalist strokes to cement a profound and evocative emotional territory, always in an organic-intuitive flow but never subscribing to a familiar course. Snekkestad’s whispering tone on the saxes, close in spirit to the Japanese Shakuhachi flute (an instrument traditionally associated with Zen Buddhism), alongside the less-is-more approach of Kjærgaard, intensify the spiritual-contemplative of the album (check the three parts of “Wind and Floating Lines” or “The always acting Nothing” and “Into Particles of Light”) and suggest elusive, kōan-like poetic textures, in a way that corresponds with the texts and poetry of Torben Ulrich. The sparse multiphonics and bird calls of Snekkestad with the precise, resonant touches of the piano strings and keys of Kjærgaard on the mysterious “Radiant recomposed” and “Holding Mountain, Holding Movement” further highlight the unique voices of Snekkestad and Kjærgaard and the immersive, healing effect of this majestic album. This music is definitely a healing force on our planet.