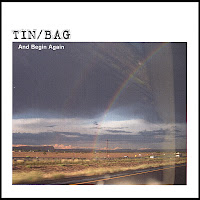 I have to say that I must change my mind about the Tin/Bag duo, consisting of Kris Tiner on trumpet and Mike Baggetta on guitar. I found their first two albums too experimental to my taste, because of the searches for extreme new sounds and sound combinations, using lots of extended techniques, but as I said, I have to change my mind, because this record is absolutely excellent. They are on this one also searching for sounds, but they seem to have found the music back in the process, and that's more than welcome, because by doing so both musicians demonstrate their creativity and skills on their instruments, but more importantly, their ability to express emotions (I know I keep repeating this, but music without emotions is nothing more than a sequence of meaningless sounds). For some of the tracks they are accompanied by Brian Walsh on clarinet and Harris Eisenstadt on percussion. The focus on this album is on the music, which is open-minded, intimate, sparse even, allowing for lots of space, also each other's. A big part of the music is improvized, but it does not always sound like that. Most tracks are down-tempo, creating a meditative, ethereal atmosphere, but there are some uptempo tracks such as "Bienvenue" which create a welcome variation. A really great album.

Listen to
And Begin Again
The In Between 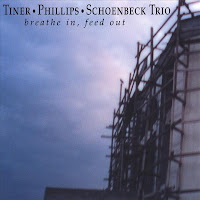 And while looking for information on Kris Tiner, I came across this record (I already knew him from the Empty Cage albums and his duo collaborations, but this one did not appear on my radar screen in 2004, and what a shame!). And what a beautiful album! It's rare to hear a bassoon in jazz (here Sara Schoenbeck), and the combination with trumpet (Kris Tiner) and guitar (Noah Phillips) is highly unusual, yet it works wonderfully well on this intimate, contemplative, fragile, open-ended, adventurous and sensitive music. It's not a new release, but it would be a shame if you missed it, which almost happened to me.

Listen to : The Mistook Time For A Line

Thanks! Nice to know the trio record is still getting some play...

You're welcome! And thanks for the music.