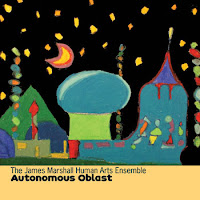 I find great pleasure in listening to "big bands" playing free jazz, adding sound upon sound upon sound. Very often it does not work though. You need this lucky moment when all instruments are in sync and focused around a central vision. This is one of those albums. It does not have the ambition to create complex interaction, nor does it have the ambition to create clarity in melody and rhythm. It just flows in a quite organic or natural fashion, like waves, or the wind blowing through leaves, or it has something tribal, with a cacophony of pure sound just there to accompany moments of deep emotional value : rites of passage, weddings, funerals. The pleasure is in the spontaneous creation, the deeply felt unity of the musicians playing without boundaries and restrictions, yet fully respectful to each other and to the musical end result. You can describe this end result as twelve musicians soloing at the same time, over/under/through/against each other, but it's rather the opposite : there are no solos, it's just one gigantic spontaneous musical movement, a sound evolving following its own inherent dynamical logic and emotional dynamics, unsteered and unplanned, a wild tidal wave of sound alternated with slow and subdued moments and with musicians joining in to add shades and color, depth and emotional accents. You need great musicians to accomplish that, and that's what this band was, when it recorded this phenomenal piece of music in the mid-70s. The band was considered to be led by saxophonist James Marshall, but in reality it was a loose gathering of like-minded musicians with shifting line-ups depending on availabilities. The first two tracks are pure gold in their uncompromising spiritual adventurousness, the third is more rhythmic, with a more prominent piano and more distinctive soloing, but it remains powerful throughout. Kudos for Jay Zelenka of Freedonia Music for having re-released this gem. It falls in the same category of great free jazz re-issues as "Thing" on Re-release.com or Norman Howard's "Burn, Baby Burn" (I actually heard later that this is not a re-issue : it's a first issue of tapes which had never been used before, so even more appreciation for its release!). It is wild, fierce and yet controlled. Awesome.

And for those interested in the title of the album :
Autonomous Oblast: "A semi-independent city-state in the old Soviet Republic," reads the dictionary....here meaning the ideal "pirate utopia". The Free State. Where the National Anthem is free improv and nobody knows the words. Sing along!

The band consists of

on "Remembrances of the Present" (track 3):

Listen and buy from CDBaby for a mere $8 or download from iTunes.