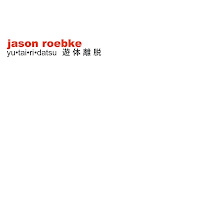 The good thing about having changed the lay-out of my blog, is that I can show white CD artwork as on this new album by Jason Roebke, well-known and often sollicited avant-jazz bassist from Chicago. On this CD he give his first attempt at the solo bass performance, and he does so with verve and creativity. The music is all his own, in a fierce dialogue with silence, in the Japanese mode that the sound in between the notes is as important as the notes themselves. Roebke goes into full deconstructivist mode, with explorations in minimalism and extended techniques. Forget about theme and rhythm, the bassist's main activities in a regular band. They become irrelevant in any solo performance. Roebke's approach is extremely sensitive, creating little sounds, be it plucked or bowed, as in Japanese ink drawings : a few quick lines tell the story. At times, there are moments when the notes attempt to cluster together in order to create fluency and to build something which you could call a pattern, but often it evaporates even before you can identify it. "Untitled 2", is the only track which is built on a single tone center, with a vamp-like phrase circling around it. Its opposite is "Untitled 7", where there is hardly anything to be heard, except for some scraping sounds. If you like bass, you will appreciate Jason Roebke's attempt to bring something new, and you will also appreciate the many possibilities for warmth, clarity, and deep sensitivity even in an environment as exploratory as this one.