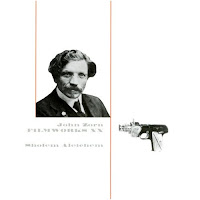 Most of John Zorn's Filmworks series produce nice and gentle klezmer music, brought by the great musicians of his other records, and this one is not any different. As on many of his albums, the core group consists of the usual suspects Mark Feldman on violin, Erik Friedlander on cello, Greg Cohen on bass, with the interesting addition of Carol Emanuel on harp and Rob Burger on accordion. Burger is someone whose albums I've always greatly appreciated yet he appears to be under-recorded. Sholem Aleichem is a documentary on the author with the same name who lived in the 19th Century and who is known primarily for "Fiddler On The Roof". The music is melodic, lyrical, nice and sweet, with the usual backbone of unison pizzicato phrases by the string instruments over which the accordion plays great melancholy tunes and the harp brings great added value to this sound which has become so familiar to so many of us. And the latter is maybe the biggest downside : haven't we heard all this before? Who would be able to tell the difference between all the various Filmworks and many more of the Tzadik releases? Sure, the harp is different, but is the music? Yet at the same time, it pains me not to give four stars to this album, because the music is great, and so are the musicians. The sadness, darkness and melancholy of the music is as usual beyond comparison. It is great, but it's nothing new. Ok, I'll give it four stars too. You'll be the judge.

My feelings exactly. Speaking of which, what do you think of Pitom? It's a new jazz-rock trio on Tzadik and they've released an album recently. I'd be really interested to hear your take on this.

Hi, I haven't listened to Pitom yet.
Sounds promising.
stef

I like this album, too... but I agree on trying to discern difference between this and many other Filmworks releases of Zorn's. It's good, but the same. But I guess good and the same is better than bad and the same.

Re: Yoshie Fruchter's Pitom... I LOVE it... great stuff. Up there with Zakarya & Jon Madof's Rashanim...