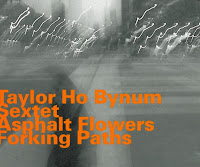 Long time collaborator of Anthony Braxton, trumpeter Taylor Ho Bynum is carving out his own style of music, and with success. Next to his duets with Braxton, his trumpet-drums duets with Tomas Fujiwara and Eric Rosenthal are also easy to recommend. He created some albums with larger ensembles, but I thought he never found the right angle or tone, yet it was obvious that he was searching to create his own voice. And with this album he has achieved this, and that's not a minor feat. His sextet further consists of Matt Bauder on tenor saxophone and bass clarinet, Jessica Pavone on viola, Mary Halvorson and Evan O'Reilly on guitar, and Tomas Fujiwara on drums, or the same band that released last year's "The Middle Picture". And although I am aware that my musical tastes are also changing, I find this record so much stronger. The composer still uses musical influences from many genres, especially on the long "whYeXpliCitieS (part III)", on which jazz converges with latin, and traditional dance music and african rhythms, but with a very minimalistic approach, interweaving sounds together like a piece of lace, complex patterns with lots of delicate openness. The album starts and ends with solo cornet, the second track brings a tightly composed unison theme for guitar and cornet. But the centerpiece, "whYeXpliCitieS", in three parts, played by the whole sextet, carries the weight of the album, starting with rock guitar, full of violence and howling feedback, but when the dust settles, beautiful and gentle interplay emerges, with pizzi viola, muted cornet, acoustic guitar, bass clarinet and brushed drumming, but tension arises when this construct breaks down into individual parts, coming together at the end in highly intense chaos. The second part starts with a very asymmetric and odd-metered unison theme for cornet and guitar, and the other musicians join the lyrical contortion, with Bauder's sax solo being the highlight. On "Goffstown", Fujiwara leads the theme, with a drums intro which brings us halfway the piece, when Ho Bynum and O'Reilly join for a beautiful theme. Ho Bynum managed to create a style which is melodic, yet full of character, fun to hear, yet full of substance, mixing complexity with a unique voice. Great stuff.

Listen to
Look Below
whYeXpliCitieS