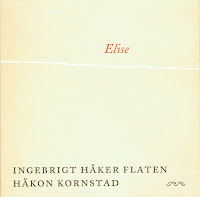 Jazz has often incorporated spirituality, especially with Coltrane and Ayler, but also as recent as with Trio X, yet here is another fine example from Norway. Bassist Ingebrigt Håker Flaten and saxophonist Håkon Kornstad together bring this utterly modern, yet reverent, rendition of traditional Norwegian hymns, collected at one time by the bassist's grandmother, Elise Flaten. On the first track, she can be heard singing, as one of the many recordings she made for the country's national radio, in an endeavor to preserve this music from disappearing (In terms of style this is as far away from The Thing, Scorch Trio or Atomic as you can imagine).

The two musicians do not play these melodies as such, of course, they are inspired by them, using the themes to expand on, or even improvising pieces in the same spiritual mood, as well as a cover of Jarrett's "Death And The Flower". The music is calm, more inside than outside, soft, peaceful, joyous at times, yet mostly subdued, deeply felt, with an incredible emotional warmth. At times some ECM musicians come to mind, like Garbarek, John Surman, or the "Without Words" album by Peter Epstein and Miroslav Tadic, but whereas all those musicians are expansive in tone, as if played outdoors with the sky and the horizon as the boundaries, this album is very intimate, as if played indoors next to a warm fire. The two musicians do not demonstrate instrumental pyrotechnics, except from the occasional multiphonics by Kornstad, but lots of precision and creativity in bringing very modern jazz based on folk tradition, keeping away from cheap sentiment, managing to be rich and restrained at the same time, true to the source material and so free at the same time. A heart and soul-warming album.

I was disappointed to read the review of Ingebrigt Haker Flaten Quintet album 'Year of the Boar', I was also rather curious to hear that one, but after reading your review I'm less tempted!