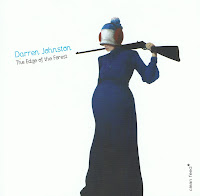 Ever since I heard "Third Impulse" and "Reasons For Moving", I was hooked on Darren Johnston's trumpet playing, and when I noticed that Clean Feed would be issuing an album by him, expectations ran high for what I thought would be an avant-garde jazz album. Yet again, I apparently assume too much. This is modern jazz at its best : rhythmic, with strong compositions, clear themes and structure, great arrangements, and above all, a list of top-notch musicians, with Ben Goldberg on clarinet, Sheldon Brown on tenor sax and bass clarinet, Devin Hoff on double bass, and Smith Dobson V on drums. Rob Reich joins on accordion on the second track, and he fits perfectly to set the tone of the piece. The music has a high degree of complexity, in that various orchestrated things can happen at the same time, at different speeds, with several melodies being interwoven, often with a solo or two on top, and this then changes the whole time, within the same piece. Another great thing about the album is that despite the complexity and the musicians' skills, this music swings, it is joyful and exuberant. It swings ("Cabin 5"), it funks ("Broken"), it bops ("Apples"), and they improvise through history from old to new and back, there are references from Ellingtonian music as much as to Dave Douglas, but in a way, I don't think Johnston needs those comparisons. He is a stellar trumpet-player, with a warm tone and a broad range, and these are equalled by his skills as a composer. Truth be told, I had expected more avant-garde, but he brought a surprise of warm, very creative and captivating modern jazz. And that's a great achievement.