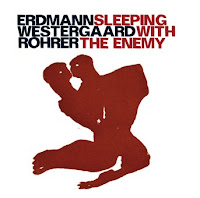 I am not too familiar with the work of German saxophonist Daniel Erdmann, apart from his Erdmann 3000 project, a quartet that brings modern mainstream jazz. This one is a little different, in a trio with Jonas Westergaard on bass and Samuel Rohrer on drums, the music is a lot more free, and it suits the saxophonist well. The music is open, often with bluesy inclinations and scales, clearly working around pre-conceived themes and structures. It is light-footed and sensitive, vaguely reminiscent of the great cool jazz sax-players, slow and unagitated, creating a moody atmosphere, with the exception of the uptempo "Bülent". Nice music.


PS. The last track is dedicated to Czech football (soccer)-player Jan Koller (I think), one of the rare moments in jazz that a track is named after a football-player, with the exception of "Why Eye" by The Geordie Approach, on which all tracks are named after the all-time stars of Newcastle United (Beardsley, MacDonald, Keegan, Gascoigne, Shearer, Milburn, Robson). Unusual... to say the least, but why not?