Austrian trumpeter Franz Hautzinger is a true experimentalist, changing the approach to his instrument (blowing techniques and the use of electronics), but also to music, starting with jazz, then to pure improv and musical experimentation, he now seems to bring a synthesis of sorts on two radically different albums, while still remaining adventurous. The first is more rock-oriented, the second is a multi-layered solo soundtrack album. 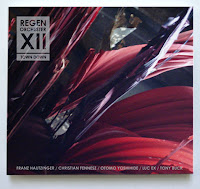 The Regenorchester (Rain Orchestra, named after the weather in London when the band gave one of its earliest performances) is a band with shifting membership, now in its twelfth incarnation, with Hautzinger on trumpet, Christian Fennesz and Ottomo Yoshihide on guitar and electronics, Luc Ex (of The Ex) on bass, and Tony Buck (of The Necks) on drums. Since Miles Davis, the combination of rock and trumpet has been a quite successful one, if you think of musicians such as Cuong Vu, Nils Petter Molvaer, Natsuki Tamura. On the fiercest pieces of this album, especially Tamura's unequalled "Hada, Hada" comes to mind, mixing unrelenting industrial sounds, a heavy beat, a wall of screeching guitar and mad trumpet playing. The track "RainDay" is an absolute monolith of musical power and drive, one of the best combinations of jazz and rock that I've heard. There is no sweetness to be found in the world of the Regenorchester, but lots of subtlety, both in the quiet as in the more violent moments. Some of the soft pieces are eery, dark, with lots of tension and experimental electronics, through which Hautzinger's voiceless processed blowing streams, and with great effect. And that seems to be the right word to describe this kind of music: it is more about the creation of "effect", than about expressivity, and in that sense closer to Pink Floyd (but not musically) than to Miles Davis, but that should not spoil the fun. Superb. 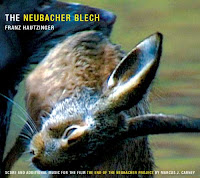 Hautzinger released his first solo trumpet album "Gomberg" in 2000. He released "Gomberg II" in 2007, which moves aways from the reductionist sounds, and is again back in the territory of harmony and rhythm, with lots of overdubs and careful construction, sometimes almost sounding symphonic. On the soundrack for the documentary by Marcus Carney, "Neubacher Blech", he continues in the same vein, but with added ambient sounds. Even melody resurfaces after so many years of exploration. As Hautzinger explains in a recent Wire Magazine interview: "I crossed this point and continued on, totally excluding the old parameters of harmony, rhythm and melody. But after a while I thought 'no', I can understand why pitch and melody are not over. You can see it in the development of painting, after Mondrian, a lot happened. Different possibilities". The album consists of 14 short tracks, all around 1 minute long, and one long track of over half an hour. The music is somber and fluid, and concessions were made to the requirements of movie making, resulting in more atmospheric moments. This does not mean that this music is mainstream or that it really left its experimentalist's streak. It still requires attentive listening, yet it's less hermetic and hence a little more accessible. Good for us.