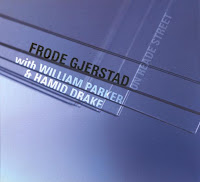 It's been a while that I reviewed the great William Parker and Hamid Drake rhythm section, but it's as usual a great pleasure to hear them, for the fourth time together with Norwegian alto saxophonist/clarinetist Frode Gjerstad. Gjerstad is someone who can build a piece while improvising, moving it forward, slowing down, then intensifying again, playing short bursts or long phrases, but it remains focused, a real and unusual strength. And Parker and Drake are the perfect counterpart for this, broad-ranged in possibilities, flexible in their adaptative powers, creative in the use of their skills. Listen how Parker suddenly starts double-timing his bass-line on the first track, adding a totally different dimension to the piece, without rushing it on, then falling back into the tempo, yet when he double-times again at the end of the track, Drake follows suit, and it becomes a great intro to get his drum solo going. The second piece becomes a lot more emotional, yet also a little more abstract too in Gjerstad's phrasing on Bb clarinet, with Parker starting on arco, then shifting in and out of fixed rhythmic patterns, Drake just accentuating the solo's evolution, yet halfway the track Parker moves into one of his typical boppish vamps, which Drake can't resist, over which Gjerstad plays high-pitched notes, falling into the rhythmic pattern too, but not for long, moving back into abstract chaos, then playing back together, ending in total calm and warm restrained beauty, with Drake even using his brushes! The third track is the longest, the most jazzy too, and if I'm not mistaken Gjerstad even starts using one of Fred Anderson's typical phrases, something that Parker and Drake must have felt familiar with, yet just as with the previous tracks, they vary a lot, yet it stays interesting throughout, with sensitive moments, high intensity moments, playing on the border between free jazz and free improv, the US meeting Europe, but it all fits within the same coherent approach. They deliver on expectations. 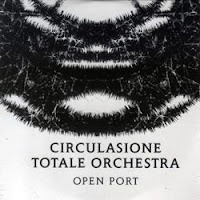 Circulasione Totale is one of Gjerstad's projects for larger ensemble, which usually consists of a varying line-up, yet mostly with the usual selection of top Scandinavian free jazzers, with Bobby Bradford on cornet. From this band, I liked Borealis best (it's the smallest version of the band), but I must say I am not too familiar with their other albums.

This album was recorded in May of this year, and the band consists of a great selection of American, British and Scandinavian musicians: Bobby Bradford on cornet, Ingebrigt Haker Flaten and Nick Stephens on bass, Frode Gjerstad and Sabir Mateen on both clarinet and saxophone, Anders Hana on guitar, John Hegre and Lasse Marhaug on electronics, Louis Moholo-Moholo and Paal Nilssen-Love on drums, Borre Molstad on tuba, Kevin Norton on vibraphone, Morten J. Olsen-electronics and percussion.

I am not a fan of larger bands (not often). I am not a fan of electronics (not often). I feel I can't judge it. It's does not relate to me. It has some great moments, but most of the times it sounds like they're not co-operating to reach results. Especially the electronics belong to a different universe, as if someone would be cutting the canvas while you're making a painting. But some parts are truly excellent, especially the third track, some are horrible, as is the fourth one. What can I say?