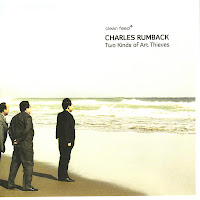 Clean Feed really is the label that spots most of the upcoming talent: here again, Chicagoan drummer Charles Rumback gets a chance for his debut release with a band consisting of the double sax front of Joshua Sclar on tenor and Greg Ward on alto, and with Jason Ajemian on double bass. The music is interesting for a variety of reasons. First, because the compositions integrate elements of a non-jazz origin easily, in a typical post-modern fashion (is that what he means by the one kind of art thieve in the title?). Second, because the music is totally unlike what you would expect from a drummer, whose role is fully in support of the two horns that slowly build the music. I almost wrote "reducing his role", but that's not the case: the accents, the rumblings, the rolls, play a quite important part in the overall atmosphere, adding color and drama to the slowly evolving dialogues rather than rhythmic support. The music itself is impressionistic, very gentle and sensitive to sound quality, with the saxes playing almost without air pressure, like a light breeze, barely touching you, but touching you all the same. But not only Ward and Sclar, but also Ajemian's arco is precize and pure. Things get a little more agitated with "Four Ruminations", on which a mid-tempo repetitive sax riff is the core around which the rest of the music evolves, but with the next track the now familiar calm development returns. Rumback managed to create his own voice with a first release : subtle and sensitive, with lots of attention to the overall sound, really sounding like the early impressionist painters : you still see the figures, but barely, the apparently random soft colors create a shining and warm vision, which becomes the dominant feeling of the listening experience.