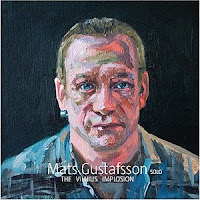 I must admit that it took a while before I wanted to listen to this album, because I feared an endless parade of undefinable sounds, clicks and quacks and squeals, the kind of avant-garde meaninglessness that I abhor. But I was wrong. Totally wrong.

With titles inspired by the late Cuban American artist Felix Gonzalez-Torres, Swedish saxophonist releases his second solo album (vinyl LP on 500 copies only), and it is a solid one. He is an absolute master in getting highly sensitive, almost emotionally painful notes out of a real physical struggle with his horn, making it weep and scream and howl, with one voice, with many voices, shouting through it, or softly whispering.  The real value of his playing does not lie in the incredible technique he demonstrates to extract so many different sounds out of his instruments, that's just the basis, the real artistry is what he does with it, using them to make indeed a piece of art that will leave nobody indifferent. He can be so gentle and sensitive while being so authentic and raw and violent at the same time. Like life itself, it's a long struggle between attraction and repulsion, between understanding and alienation. Out of this conflict, out of this tension, a great aesthetic arises, not always a nice one, and definitely not an easy one, but an emotionally very rewarding one. The physicality and the direct emotional impact are in line with one another, are the same thing, are impossible without one another. Angry and sad at the same time. And deep, so deep. He doesn't compromise, and that makes it so great and real. It is not an easy task to bare your soul like this. Paul Rogers managed it on "Being", Gustafsson does it here. Don't miss this one.

Even though I like it a lot, I find this a tough listening experience that I maybe can't grasp well enough to award it that high a rating. But: I wholeheartedly agree that every No Business LP/2LP contains exceptional music

Thanks Guy for the comment. Musical appreciation is always subjective. And it is a tough listening experience. That was also my first impression. Keep listening.