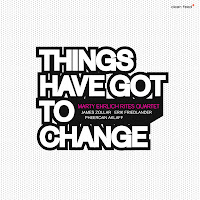 Marty Ehrlich is without a doubt a fantastic saxophonist, former member of Julius Hemphill's sextet, but also a creative artist who's been struggling to find his voice over the past decade, changing line-ups, playing around with styles and sub-styles, but always with an incredible sense of quality and high level of band members. His Dark Woods Ensemble, that originally featured Abdul Wadud, the cellist of the Hemphill band, later succeeded by Erik Friedlander, is without a doubt his most successful endeavor so far in my humble opinion.

On this album he changes the line-up again, with Pheeroan AkLaff on drums, with whom he already played on his first album in 1984. The great change is the presence of James Zollar on trumpet, a musician who is lyrical, very rooted in traditional bluesy Armstrong tones, yet equally versatile in the most modern improvisations. So far, Ehrlich always appeared to enjoy collaborating with fellow saxophone or clarinet players, such as Ben Goldberg, Stan Strickland and Tony Malaby, so the sax-trumpet front adds a new sound dimension, one that is more crisp and open-ended. At the same time, the combination of the alto with the cello adds to the lightness of the higher tonal regions, accentuated by AkLaff's stellar cymbal work. It is - not by coincidence - the same line-up as on Julius Hemphill's "Dogon A.D.".

The music itself is hard to describe: it's post-modern jazz, carefully composed and arranged, with lots of room for powerful and emotional improvisations, and possibilities to venture into more free and avant-garde areas, a whole range of jazz approaches that can even be present on one and the same track ("Song For Tomorrow"). The music is joyful as on the swinging "Dung", dark and sad as on "From Strength To Strength", deeply melancholy and contemplative on "Some Kind Of Prayer", only to end with one of the most magnificent pieces of music ever written, Julius Hemphill's "Dogon A.D.",* the wonderfully hypnotic composition that is driven by the repetitive arco cello tones, over the mad 11/8 rhythm, with the horns finding their theme around and against the pulse. True, it is not the original, and even trying to cover it takes courage, but the performance is of a really top-notch level. As is the entire album actually. Four stellar musicians making great music. What a joy!

* If you happen to have the Hemphill original, play both versions one after the other, and you will notice the difference between superb and very good.