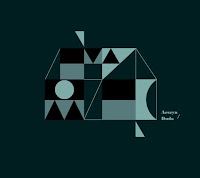 We'll continue with some sax-drums duo, now from Poland, with Tomasz Duda on saxophones and Krzysztof Topolski (also known as Arszyn) on percussion. The music does not have the broad range of the Braxton-Hemingway album I reviewed yesterday, but it has the merit of being extremely direct in its expressivity, starting from the absolute basics of rhythm and phrasing, often adventurous and playful at the same time, wondering about the sounds that can erupt out of their instruments, sometimes tribal, sometimes deep into the avant-garde, sometimes barely touching silence, sometimes wild and agitated, yet always hypnotic and compelling, and increasingly so with the sensitive minimalism that ends the album.

Stylistically, they hesitate to chose between jazz, free improv and avant-garde, but that does not go at the expense of the album's unity. Worth checking out!