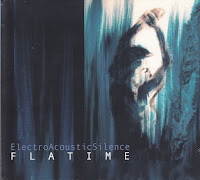 I was quite enthusiastic about ElectroAcoustic Silence's previous album,Cono Di OMbra E Luce, centered around the majestic duo Mirio Cosottini on trumpet and fluegelhorn and Alessio Pisani on bassoon and contra-bassoon. I was stunned by their great combination of gravitas and lightness.

On this album they are accompanied by Taketo Gohara on sound design, Filippo Pedol on double bass and electric bass, and Andrea Melani on drums.

The interplay between trumpet and bassoon remains exceptional, and the best moments are for sure where both instruments play the lead role, sometimes in unison, often in counterpoint, weaving great musical textures. The addition of the rhythm section adds a kind of nu jazz element to it, bringing the music closer to for instance Nils Pettr Molvaer or Markus Stockhausen, with obvious reminiscences to Miles Davis' Bitches Brew, especially when the electric bass and the drums adds some funk to the proceedings. Gohara's "sound design" is sometimes excellent, especially if he goes into the lower tones, but at moments it sounds like a five-year old kid playing with a radio dial. Luckily, these moments are sparse.

The best piece is "Ming's Attempt", possibly because the bass is acoustic, the world has turned a little weirder, and the band manages to show the true potential of its own voice.

In all, less original and strong as their superb previous release, but a nice album nonetheless.

if you don't mind, i'd like to link exchange.
please visit my blog http://musicdepartement.blogspot.com i've put your link