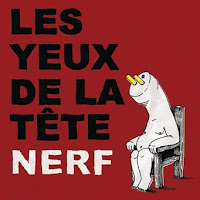 Sam on sax, Ivan on drums and Luc on basses form an absolute power trio, playing short uptempo pieces mixing jazz and heavy rock into a fantastic and fun album.

Think of the Swiss Lucien Dubuis but less funky, or the power of Thomas Chapin, or of Andrew D'Angelo with Skadra Degis. Great references for any modern sax player. The music, is like these examples full of passion and intelligence, and the last is really needed to keep surprising the listener with such a small line-up. Luc's approach to bass, playing full chords like in heavy metal bands is surely one of the most discerning elements.

But they go further than pure rock 'n' roll. "Barghest" sounds like a cinematic mad car chase soundtrack, full with a strong theme, sudden stops, then picking up speed again. You get some Zorn too in the wild sax playing, or Led Zeppelin in the unrelenting drumming, ... On top, I find it also incredibly ingrained in the French culture,  even if the music is only instrumental, think of Lucien Dubuis, or Slang, or Camisetas : rebellious and clever.

Listen further on MySpace, and check out the dates of next concerts in Europe.

Thanks for the review. I will download from Emusic thanks to you. The Slang is good also and is also on Emusic. I love Lucien Dubuis so this music is great to find.