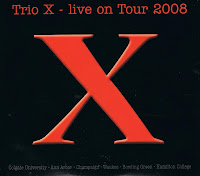 When there's a new Trio X record coming out, I feel like a child waiting for a birthday gift, in eager anticipation. That's how excited I am about this band, and have been so for many years.

Even though the band has evolved over the years, it has stuck to its origins: to merge very forward-looking sounds with the sensitivity and the material of tradition, a little bit in the same concept as Albert Ayler, fusing "power and warmth", as Bob Rusch writes in the liner notes.

Even though the music is fully improvised, keeping things completely open-ended at any time, or playing in the mood of the day or the evening, they are used to work around the key themes. "My Funny Valentine", figured on their first recorded performance (on their second album :The Watermelon Suite, 1999).

Today, it is still part of their "playlist", as on this newly released 5-CD album capturing their concerts of their tour in 2008 in New York, Michigan, Iowa, Illinois. The thing is : you never know when these themes will enter into play and sometimes it takes a while into the improvisation before they arise out of the free flow of phrases. The gospel and traditional tunes thrown into the mix here are "A Secret Love", moving and spiritual, "Motherless Child", slow and sad, "Old Man River", full of sensitivity and sorrow, "Going Home". The new tune to be used is "Brownskin Girl", made popular by Harry Belafonte in the late 50s, in a great variety of forms, often funky and fun.

Most of the time you get on-the-spot free improvisations, very lyrical at times, raw and fierce at others , never lacking in intensity. "Prairie Fire" is a good example, with absolutely powered-up and raging circular breathing evolving into a hard blues switching back to sensitivie squeals: even in the most avant-garde moments, tradition is never far away.

What is changing over the years is the speed and the sense of adventure. In the early years, the raw musical adventure clearly dominated over the slow and sensitive moments. Today, that order is reversed, but it doesn't mean of course that the adventure is gone. But in all frankness, I would have preferred more of the wilder stuff like the opener on the 4th CD "Waukee Hello Naima".

Oh, yes, for those who don't know the band : Joe McPhee is on tenor and soprano, once in a while picking up his pocket trumpet or flugelhorn, Dominic Duval on bass and Jay Rosen on drums, three stellar musicians who've come to know each other so thoroughly over the years, that they play as a trio should play, as one single being producing common and coherent sounds.

One technical downside is the very low recording volume. When playing the CD in my car, even with the volume up to the maximum (and I usually never do that) the music is at times barely audible.

The question remains what the album adds to the 8-CD box that was released in 2008. If you have nothing by the band, this would be a great place to start (although more expensive than their equally excellent "Roulette At Location One" or "Live In Vilnius"), if you already have the 8-CD box and are an average fan, this album may seem a little redundant, but if you are a die-hard fan like this guy, this is again a must-have.

The sheer volume of CDs is crazy of course, but since every performance is so different, hearing it all is so much fun.

I hope you still get gifts for your birthday.

If you love jazz, you might be interested in Montreal Jazz Festival's special feature on jazz music. Check it out!

If you love jazz, you might be interested in Montreal Jazz Festival's special feature on jazz music. Check it out!