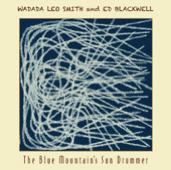 The most magnificent moment of this year's Vision Festival was the duet between Wadada Leo Smith and Günter "Baby" Sommers, not only because of the fabulous playing and interaction of both musicians, but also because the trumpeter has made this format one of his own, delving into the possibilities and expanding them over the years. Lately his stellar "America" with Jack DeJohnette, his equally excellent "Wisdom In Time" with Günter Sommers, or his more meditative "Compassion" with Adam Rudolph.

Here we find him again in excellent company, with Ed Blackwell no less, the fabulous free jazz drummer who laid the foundations for his instrument's new role with the Ornette Coleman bands and Old & New Dreams. Like with Don Cherry on the historic "Mu", he is possibly the best partner for this kind of endeavor and also for Smith's concept of music : it is freedom while being based in African rhythms, blues and jazz. Blackwell is incredibly creative and expressive, adding little touches, shifting meters, reorganising the beats constantly, actively shaping the overall sound and melody. Just listen closely to the album's title track if you want to be convinced.

The title track also figured on the album with Jack DeJohnette as "Ed Blackwell, The Blue Mountain Sun Drummer". It's interesting to compare both performances: not only the difference in approach by both drummers - equally stunning, with DeJohnette having a lighter touch, more cymbal work, steadier in the rhythm, and Blackwell using his polyrhythmics on his toms without losing the beat, more African, but Smith's tone has also changed, become deeper, richer over the years, but interestingly his improvisational skills and his capacity of positioning the composition - of putting it right there in front of your ears as if there was no other choice for it to sound that way, despite the endless possibilities, are still there.

He plays some of the tunes from his "Kulture Jazz" album which was released on ECM in 1995: the bluesy song "Don't You Remember", "Uprising" and "Albert Ayler In A Spiritual Light". This also demonstrates how Smith nurtured his own ideas and compositions over the years and decades even.

Smith's trumpet playing is incredibly good as can be expected: he can be intimate and sensitive and bluesy, but he can be expansive, jubilant and soaring.

The performance was recorded live on October 23, 1986 at Brandeis University, Massachusetts. That's 24 years ago. The sound quality is excellent. How fantastic that we get to hear this. I hope there are still more gems in a drawer somewhere.

As usual, I can only recommend it. Highly.

Listen to this and you will feel so refreshed.

Just listen to this!


The cover art is by Lynn Horton, jazz journalist from All About Jazz. She also wrote a great article on the trumpeter, which you can read here.

Ed Blackwell truly is one of the underrated drum masters in jazz history. His sound is so personal!
Glad he isn't forgotten yet.
Peter

I saw Wadada Leo Smith's Golden Quartet concert at the Brooklyn Public Library tonight -special concert. Smith on trumpet, John Lindberg on bass, Angelica Sanchez on piano, and James Kamal Jones. Great set - all new stuff. My friend Matt and I spoke to him for a while after the show - terrific human being beyond his musicianship. I've seen him 3 times now. I also saw Henry Grimes, Roy Campbell, & Sabir Mateen at the show. great night. This kind of stuff for free? Only in NYC, but it isn't worth a damn if you don't go out and see it while you live here. Glad to see it.

Great album can't stop listening to it. Both men are at the top of there game but Blackwell is on fire. His skills never cease to amaze me. very glad this gem surfaced.
jeff

This really is great. Ed Blackwell's drumming is close to perfect.And you would never guess it was a 24 year old live show.

I'm so glad you found this one, Stef.

Blackwell is one of my favorite drummer and so if I have the opportunity I buy every record he played in (last buy was Just Play, another duet with Karl Berger). So I tried with amazon.co.uk and amazon.com but it seems they don't have it. Could you please tell me where to buy?
Thanks a lot.

Hi Allesandro, you can buy it on iTunes.

it is also available from cdbaby.com!

Stef,
I am also writing for http://jazztimes.com/.
Lyn

I no longer write for AllAboutJazz.com. All my articles are still there and will remain there.

Right now, most of my writing is for JazzTimes and my Blog.