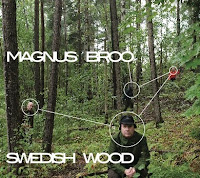 Swedish trumpeter Magnus Broo is best known from his work with Atomic, but he has also made several fantastic albums with The Godforgottens and Angles, but also in with his own quartet  and other projects including "Game", a great duo album with Paal Nilssen-Love .

Now he is back with another quartet, with two bassists and a drummer : fellow Swede Torbjörn Zetterberg and Canadian Joe Williamson play bass and Norwegian Håkon Mjåset Johansen is on drums.

The album starts with "O What A Beautiful Day", with a joyful theme, somewhat repetitive, but things get better with the second track "Thoughts Are Things", which gives ample space for the two basses to interact, then the tempo is kicked up a notch for a boppish improvisation. "Acoustic Kitten" is calm and playful, with a sweet theme by the trumpet and one arco bass, while the other bass is plucked, a tune on which the added value of playing with two basses really comes to the fore, a composition that could have come from Natsuki Tamura's Gato Libre. The title track is more nervous, with a great rhythm and the two basses playing competely intertwined, the melody is folksy, the improvisation expansive.

"I Hear You" is great fun, with the two basses playing a different repetitive vamp, in perfect sync with Johansen's sparse and varied drumming, and Broo's trumpet-playing astonishingly free and impressive - Don Cherry is not far away, then the music collapses for some a slow duet between the two basses, then slowly picking up the tempo again for a bluesy piece, with goosebump playing by Broo, reminiscent of Louis Armstrong and at times Lester Bowie, before coming back to the original tune and free playing.

"New Weather" is the longest tune, already featured on the recent Vandermark 5 "The Horse Jumps" CD, the most subtle and varied composition, that starts with small sonoric explorations between the basses before the great theme is launched after some four minutes. It is without a doubt also the most wild and modern piece.

The album was recorded in the Atlantis studio, the former Metronome Studios, where the Abba albums were recorded.

It is an album with lots of variation, sometimes a little too different in terms of mood, and not of the same magnificent and compelling power of some of the records mentioned above, but the playing is excellent, and the idea of having two basses was a good one.

Magnus Broo is one of my favourite trumpet players -- thanks for the heads up on this.
Anybody who likes the unusual 2 bass setup will probably also enjoy Bobby Bradford's "Lost In L.A." and Dave Ballou's "Dancing Foot"

I'll have to check those out. Bill Dixon's 'November 1981' and the 'Vade Mecum' records immediately came to my mind.