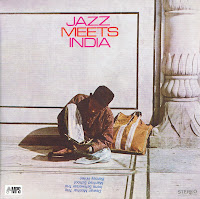 The Beatles were the first pop band to introduce the sitar and Indian music to broad audiences, with the George Harrison song "Within You, Without You", released on Sgt Pepper's in 1967 possibly one of the better known ones.

This album was recorded in the same year, on October 23rd, in Villingen, Germany, by a band consisting of Irene Schweizer on piano, Uli Trepte on acoustic bass, Mani Neumeier on drums, Dewan Motihar on sitar and vocals, Keshav Sathe on tablas, Kusum Thakur on tambura, Manfred Schoof on trumpet, and Barney Wilen on soprano and tenor saxophones.

True, the sitar had been used before in jazz, though sparingly, and Coltrane and Miles Davis were influenced by Indian music, but to my knowledge (and tell me if I'm wrong) this is one of the first real joint performances, on equal footing between musicians from east and west.

The first track "Sun Love", starts with the Indian trio, with the sitar taking the lead voice, and once their music has been established, the drums join, then the piano and the bass after some five minutes, hesitantly, respectfully, trying to become one with the Indian rhythm and modal scales, yet Schweizer's response is unbelievably precise and Motihar's response even better. Once they get to this comfort level, the volume increases without trampling too much on the vulnerable sound of the Indian instruments. When the calm returns, Schoof's trumpet enters, slow, magnificent, warm-toned, rapidly breaking the set boundaries, dragging bass and drums along into more intensity, falling back after a great improvisation on the slowly flowing essence of the piece, as the opportunity for Wilen to join, brilliantly, emotionally strong and sensitive, yet the long track ends with total mayhem in the best free jazz tradition, with controlled chaos, followed by the absolute calm of the solo sitar.

"Yaad" is shorter, with sitar and Indian vocals leading the way. The piano adds sparse tones and Wilen's entrance is again sheer brilliance of finding the right tone and approach, emulating the sadness of the voice, and with both horns adding great slow echoes to Mohitar's singing.

The last track, "Brigach And Ganges", starts with the jazz musicians : arco bass, tenor and trumpet, for some abstract free form, with Neumeier adding percussive accents, then sitar and piano join and turn the piece seamlessly into Indian raga form, with changing levels of intensity and volume depending on which instrument is taking the lead.

And then it's over: and it's too short, about thirty-seven minutes.

A real find (thanks Tony!).

If you're interested in world jazz: don't miss this one. The sound quality is absolutely excellent thanks to the digital remastering of the original tapes.

Listen to the promo video

Equally interesting in terms of jazz/Indian music fusion are Joe Harriott's records with John Mayer (Indo-Jazz Suite and Indo-Jazz Fusions I & II), which I believe actually pre-date this one by a year or two. Check them out.

Thanks, Félix-Antoine, I will check them out. Great information .

The piece "Fire Night," composed by Ravi Shankar and released in 1962 on his album Improvisations, features Kanai Dutta on tabla, my teacher Harihar Rao on dholak (and sitar on other tracks), Nodu C. Mullick on tamboura, Louis Hayes on drums, Gary Peacock on bass, Dennis Budimir on guitar, and Bud Shank on flute. Harihar told me Ravi Shankar did not play on the track, although he composed it, because at the time he thought jazz was a lesser form of music. This piece inspired me to become a musician.