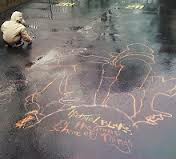 
Michael Blake is often classed on websites as avant-garde, although to this day I've never really understood why? His early associations with the Lounge Lizards seem to have set up a precedent which follows him around. In my view Blake is better classed as 'left-field', looking at jazz from a very different angle compared to the average mainstream jazz performers coming from the states. However, Michael Blake's music isn't what you call avant-garde, it's very accessible and often melodic in content. His releases 'Right before your very ears' and 'Control this' on the avant-garde label Clean Feed are often very melodic even in there wildest moments.

On 'In the Grand Scheme of Things' Michael Blake again comes up with another multi-faceted 'Blake-ish' offering, something that doesn't really sit in any particular basket (*), and probably one reason he's not better known in the jazz world. As with his wonderful Blake's Tartar Michael Blake covers a lot of territory. The album is an attractive mix of rock, jazz, semi-free, gospel and electronica, bringing several directions together musically. A tune such as 'Willie (the lonely cowboy)' hovers over a lovely melody, gradually sliding into an out of tempo (rubato) improvisation. This develops organically with the soloists leading the ensemble. On the other hand there's 'Cybermonk' a swinging tune which could of come from his tribute album to Lucky Thompson. Another facet heard on the album is 'The Searchers', a long piece which stretches out to develop interesting atmospheres, melodies and solos. The last half of the album really moves into open space territory. The themes 'A View of Oblivion' and 'Freedom from Exile' are very strong pieces using the possibilities created by the electronica present of a Moog, keyboards and JP Carter's processed trumpet. The melody and development of 'Cordial Drive' particularly caught my ears as it conjures up an almost modern Bitches Brew musicality. The one track (last but one) that again falls outside the rest of the album is 'Treat her right', an old chestnut which became a hit for Otis Redding (among others) which is played with much respect.

Michael Blake has assembled an interesting group around him known as the Variety Hour 4tet. Two of the musicians Dylan van der Schyff (drums) and JP Carter (trumpet and electronics) have often popped up on our blog, the third Chris Gestrin (keyboards) I know less well. All three are perfectly in tune with Michael Blake's music - Gestrin and Van der Schyff have already played with Michael Blake (check the above musicians links on this blog). Looking at the musicians (above) you'll probably notice the group doesn't have a bass player. So, much of the bass qualities are created by Chris Gestrin using a Moog synthesiser combined with his keyboards. This creates some fine 'spacy' sounds which float round in the pieces and at the same time manage to anchor down the chords/harmonic progressions. The other very important ingredient in the groups musical palette is JP Carter. 'JP' rarely plays any direct solos, but uses his trumpet/electronic set-up to create floating lines that either shadow Blake's own voice, or create (as we say in the jazz trade) 'guide tones' which give the colour of the harmony.

An excellent record and very clever (very creative) in it's use of electronica.


* = Concerning Michael Blake's multi faceted musical style(s). Some more reviews on our blog here, and another Amor de Cosmos reviewed on this blog several years back.