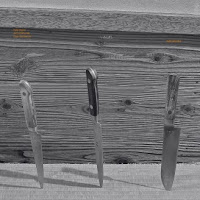 An album like Imikuzushi by the trio Keiji Haino (guitar and vocals), Jim O'Rourke (bass), and Oren Ambarchi (drums) makes me wonder what, exactly, I value in noise improvisation. Forget jazz. This hardly resembles that genre anymore. It may borrow from free improvisation, but it just as equally borrows from psychedelic rock and the more daring fringes of Krautrock. The O'Rourke/Ambarchi rhythm section, that is, keeps mostly steady, sounding much closer to these latter rock experimenters than to anything in the realms of free jazz or free improvisation. And, ultimately, they're practically incidental to the "front man." Yes, although this record is billed to all three, it sounds like a Keiji Haino album through and through. His vocals and guitar dominate the mix and the jam structures.

So why does this music make me reflect on the hybrid genre of noise rock / free improvisation? The answer in part lies in the relative mediocrity of this record. The playing here puts into perspective what makes the truly outstanding recordings in this "style" genuinely excellent. To clarify, I would point to two distinct aspect of the music, what I will call direction and texture. By direction I mean not so much rhythmic propulsion as some sense of gravitational heft to the playing that feels like it's "moving" somewhere. It needn't be a definable beat; but it has to have "pull." By texture I mean the exploration of the potential for sound that any given instrument offers. This texture is independent of notes, and the inspired improviser will constantly remind us of the materiality of his or her instrument (even the voice) by pushing it to extremes or subtly testing its boundaries. No single recording has to avail itself of both of these aspects. Fully mining the potential of one is sufficient to make engaging music. Most free improvisation lacks direction, and that’s fine. Most straight jazz or even free jazz in the classic Fire-music vein lacks texture—and that’s okay, too. Each approach makes up for that lack in transformations and surprises that open up their respective sphere of sonic exploration.

Imikuzushi does not satisfy as a record with direction—and that would be fine, except that it is so firmly rooted in the rhythm section. In the best moments (the second half of the final jam) it benefits greatly from an inventive interplay of rhythm section and lead (guitar/vocals), but for the most part Ambarchi and O'Rourke disappoint. They too easily fall into a monotonous, relentless pounding that lacks direction, variation, and dynamics.

This weakness is in part counterbalanced by Haino's textured exploration of the guitar (and to a lesser extent vocals). He does here what he has always done well, which is to extract his distinctive banshee-wail skronk in complex layerings. But he also varies his sound considerably over the hour-plus live recording, ranging from abrasive slices of sustained noise to softer tremolo strums to splotches of notes fed through various effects pedals. Most of the best moments of the record, that is, showcase Haino's uncompromising technique.

The problem is that these are only exciting moments, and Haino plays for 10-plus minutes straight (sometimes longer) on each of the album's four tracks. Here, at least, he is unable to sustain interest for that long. Add to that the rather lackluster rhythm section. Haino's skronkery in this context feels like it has been coopted by a psych-jam practice session. And that, in the final analysis, is why the record is only mildly stimulating.

To be fair: the album is hardly bad; indeed, I would say it is good, just not very good. At its best, it is excellent, such as its final ten minutes, when O'Rourke's bass comes to the fore and commands real presence. Ambarchi seems to sense the new urgency, and Haino calms down. His plaintive vocals and short outbursts become chilling. It's too bad it takes an hour for the trio to reach this level of musical cohesion.