Last month I was wondering what Adam Lane, great bassist, composer and arranger was up to. It had been some three years since his phenomenal "Ashcan Rantings" had been released, and then all went quiet, apart from his work as a sideman in various line-ups. Luckily I am the kind of maniac who looks for new music by scanning all new iTunes, eMusic and other possible sources of music relentlessly, not relying on the promotional capabilities of either musicians and labels to get all relevant new releases.

Luckily I also found these two new Adam Lane releases on CIMP via iTunes. The two albums below do not feature on the label's website, and they are not announced as new recordings on Lane's website either, or rather to be found as if they were his first two recordings in his discography.

Both albums have the same line-up, with Lane on bass, Avram Fefer on tenor, Roy Campbell on trumpet, and Vijay Anderson on drums. And both albums are equally easy to recommend. Both also have the same concept: they bring old blues, American traditionals and gospel tunes by a typical free jazz unit, and the result is, as can be expected, moving, touching, heart-rending, bringing the old tunes to a new life, beautifully arranged and played. Apart from the songs' historical value and universal resonance, they way they are brought to you here makes you weep and laugh at times, the former with the great bass intro and then how the band kicks in on "Keep Your Lamp Trimmed And Burning", the latter with for instance "This Train" because of its compelling beauty, or with "Go Down Moses" for its moving intro and then berserk explosion ... to give just a few examples.

You can only wonder why they were not released as a double CD, since they form such a great unity.

This is music that is deeply rooted in the origins of jazz, sucking the emotional sap out of a century of musical adaptations and branches, and Adam Lane is possibly the best placed to bring those songs in a modern context, having demonstrated his talent for free-spirited sensitive arrangements in all his previous releases, now expanding it, broadening it, giving the material back its originally intended pain and awe and spirituality, all in a new form but while keeping the roots intact.

His deeply resonating and bluesy bass coaches this quartet into a warm and soulful restoration of tradition. Lane himself shines, and so does the rest of the band, and Roy Campbell's playing on most tunes can be described as absolutely stellar, not only because of his technique, but because of the feeling he gets across in his equally bluesy soloing, while Fefer does some equally hair-raising soloing of the more extravert kind, greatly supported by Anderson. 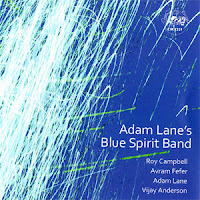 "Blue Spirit Band" was recorded in 2007, and brings such well-know songs as Looky Looky Yonder, Follow the Drinking Gourd, House Of The Rising Sun, Peace Like a River, Keep Your Lamp Trimmed and Burning, Old Time Religion, and Myrtle Avenue Blues.

Listen and buy from iTunes. 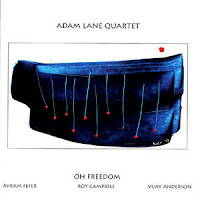 "Of Freedom" was recorded in June 2009 and brings the following songs : This Train, Hold On, C-Line Woman, Go Down Moses, Everybody Loves Saturday Night, Wayfaring Stranger, Cotton Eyed Joe, and Oh Freedom.

Listen and buy from iTunes.

We can only look forward to Adam Lane's upcoming trio album on No Business, with Darius Jones and Vijay Anderson.

And I hope that we can look forward to another release: live recording of his Full Throttle Orchestra form last years' Ljubljana Jazz Festival. Clean Feed should release this ...

Great - even more fun to look forward to. The Ljubljana Festival becomes a real source of great releases!thanks