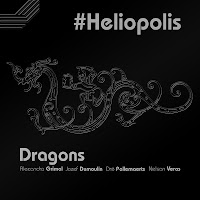 French saxoponist Alexandra Grimal goes back to her native country of Egypt, to "Heliopolis", the City of Sun, which is also a neighbourhood in Cairo.

All song titles refer to Khamsin, the Egyptian wind which blows over the desert, and it gives an idea of the nature of her music, intangible, and shifting between refreshing and hard blowing. It is in the line of the duo album she made some years ago with Giovanni Di Domenico, called Ghibli, named after the Lybian desert wind.

She is joined by Nelson Veras from Brazil on guitar, and by two leading Belgian musicians, Jozef Dumoulin on piano and Dré Pallemaerts on drums.

The first track, "Khamsin 1" is a quiet and meditative piece starting with only piano and bass, then halfway the guitar and the sax take over, barely making any movement in the air around them, softly, like a morning breeze.

"Khamsin 2" is a little quirkier, with fast shifts and turns, with phrases that spiral around each other, then all goes quiet, only to pick up pace again, with all musicians gradually falling into step, as does the intensity and the power.

"Overseas" starts slowly, with a carefully composed sequence of phrases, like a story unfolding, beautifully, while the next track becomes raucous and wild, with Grimal her harder side on the tenor, not afraid to beyond what can be expected in mainstream jazz.

Like the wind, the mood shifts between the romantic and sensitive to the warm land wind of the titles, and within each track, Grimal's compositions are linear, without real repetitions or patterns, they evolve constantly, moving forward rather than returning to themes or harmonies, suite-like, full of elegance and refinement.

The coherence of Grimal's musical vision is astonishingly strong, daring in a way (including several minutes of complete silence in the last track) without being overly adventurous, which makes the music less captivating than I would have hoped for.

Hi Stef,
do you know if this is a download only release?
thanks