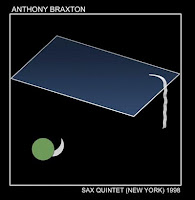 Anthony Braxton is like an anchorage. Maybe not an easy one to reach, but he’s always there for everyone longing to deal with intellectually challenging musical routes. Since several years now his label/cultural organization “The Tri-Centric Foundation” has represented a stronghold for improvisation, free jazz and avant-garde in general, running a constant work of promotion of Braxton’s immense musical archive and new productions alongside tutoring many young rising musicians (Katherine Young, Taylor Ho Bynum, Jessica Pavone and Mary Halvorson among them).

It is obvious that that reviewing a Braxton release in a traditional way, or even worse trying to rate it, raises some intellectual questions. So I will not do it.

Clearly the Maestro has long ago surpassed the musical stage related to the simple agreeableness of his musical conception (if you consider that we’re talking here about a 1998 dated recording).

The listener (I do this) can decide - honest to both his willingness and with his possibility to decode this sea of sounds and information - either to follow the paths of a greater much-sought orchestral structure or just to float in the pleasure of admirable technical skills. This doesn’t mean at all that any kind of solipsist showing-off prevails in the music since the aspect of meaningful and attractive interplays between two or more instruments is fully integrated in the choral development. What do you think about the definition of orchestrated free-jazz?

At least Braxton’s methodic numeric naming of his compositions softens the sense of inadequacy I may feel listening to his usual long many-voiced suites.

Composition No. 173 is a sax quintet recorded live back in 1998 at the Knitting Factory in New York and it features on alto saxophone Seth Misterka, on alto, tenor and baritone saxophone Jackson Moore, then Chris Jonas and James Fei both on soprano and alto saxophones and finally on sopranino, F saxophone and alto his majesty the composer Anthony Braxton.

The album is available as a digital download from Tri-Centric Foundation at a nice price (especially if you have a subscription). Recently the organization has announced its comeback to physical outputs after some years of just digital releases. It may sound interesting for collectors.

This is what I’d like to see at least once in my life:

Audio is painful but "Frankly, my dear, I don't give a damn".

As an amateur musician this is a logical way of writing a review about Braxton's music, Paolo, and I agree with you as well. His music often has a strange quality: Paul and I just saw him in Berlin at the A L'Arme Festival and immediately after the show we had mixed feelings about the performance. Strangely enough both of us had the feeling that it grew during the rest of the evening (no idea why).
No question that he is still one of the greatest creative forces in this field.