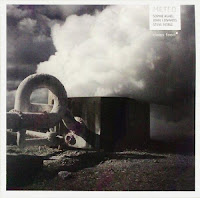 There are few greater pleasures in the free music world than the subversive piano trio. I think of some of my favorite music from the past few years—albums like RED Trio, Eve Risser’s En Corps, Hexentrio, Cousin It (also with Edwards and Noble)—and what unites them is not simply their choice of instruments, but their complete evisceration of a classic format. Not only is the piano unseated from its throne, it’s liberated from its sheltered, well-tempered existence.

Meteo settles in nicely with this group, in that it doesn’t really settle very nicely at all. Bill Evans this is not. Hell, it’s not even Cecil Taylor or Matthew Shipp. Meteo is a 38 minute performance from the 2012 Meteo Festival, but it feels more like tuning in to some cosmic broadcast already in progress, a weird aural rendering of the crunch beyond an event horizon, the swirling compression of history, instrumentality, and virtuosity as music approaches a singularity.

This is a music of heat and friction, entropy and order reborn, a reminder of the sturdy, physical fact that is a hand on an instrument and a sound against the eardrum. It’s an exhilarating and fully engaged set. If only it were a bit longer! Edwards and Noble are a common pairing, although the way they lock together is far beyond rhythm section tropes like keeping time or swinging. They work in grating scrapes and beating, pulsing drones, blasts of emphasis and dense piles of sound. Agnel is comfortable in this world; she works the piano inside and out, at once the blazing point of focus and the immense backdrop all else is set against. The dissolution of a foreground and background is key in Meteo.

Clean Feed selects a slightly different image, describing the trio as a circle, rather than the more traditional triangle. It’s true: Meteo can’t be reduced to simple geometric angles. It’s something more akin to calculus, the curve approaching infinity, or the kaleidoscopic complexity that blooms from an endless fractal. Or better yet—maybe it’s the boulder tossed in the reflecting pool, warping and disrupting the delicate image of piano trios past.

A wonderfully eloquent review, Dan..... keep up the stellar work !!

Thanks for the kind words!

And Howard Riley for sure! My original list of subversive piano trio albums was spiraling out of control, so I elected to pick just a few recent ones. Riley's trio holds a central spot in that lineage for sure, though.

I’m not sure about subversive, but the following also expand the piano trio format in new and interesting ways: the Lowell Davidson Trio (a classic on ESP, and that’s more or less it) and the trio of Veryan Weston, John Edwards and Mark Sanders: “The Mercury Concert” and “Gateway To Vienna”, both on Emanem.