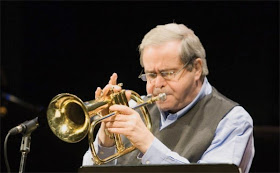 We have just read the sad news that the great trumpeter and flugelhornist Kenny Wheeler has died.

Mr. Wheeler was born in Toronto and after studying harmony and trumpet at the Royal Conservatory in Toronto in the early 1950s, he went to London. There he became a founding member of the new wave of British free jazz in the 1960s, when he joined the Spontaneous Music Ensemble where he met people like John Stevens, Derek Bailey, Tony Oxley and Evan Parker. He later worked with the experimental composer and saxophonist Anthony Braxton, Alexander von Schlippenbach’s Globe Unity Orchestra, the United Jazz and Rock Ensemble and was also part of Azimuth, a trio with Norma Winstone and John Taylor.

Wheeler was a very modest, even shy man who will always be remembered for his warm and lyrical sound as well as for his big band compositions.  He played on seminal albums like SME’s Karyobin (Island) and So What Do You Think (Tangent) and also released a lot of marvelous albums as a leader like Gnu High (ECM). My personal favorites have always been Angel Song (ECM), his drummerless quartet with Lee Konitz, Bill Frisell and Dave Holland, his composition Ana for Alex von Schlippenbach’s Berlin Contemporary Jazz Orchestra (also released on ECM) and his collaborations with David Sylvian (Nostalgia is one of my all-time-favorite pop songs).

Wheeler died after a short period of frail health at a nursing home in London on 18 September 2014.  His death is a terrible loss.

Listen to one of his compositions and hear Norma Winstone and Evan Parker talk about him here:

Such a sad loss. Thanks for this tribute, Martin. I too love *Angel Song*, as that was my first introduction to Wheeler's lyrical beauty. But over time I also came to admire his fierce spirit of adventure and risk-taking, something that continued well into his later years. His performance from a few years ago on Foxes Fox (Live at the Vortex) with Evan Parker is just one example from a musician who never stopped exploring. He will be missed.

I have been a long-time fanatic of Kenny Wheeler from my first years exposed to improvised music here in Toronto, where he returned quite often to visit from his native England.

I saw Kenny in several settings ..... but will never forget a performance where he sat in with Graeme Kirkland's band at the Music Gallery. It was the first (and only?) time I ever saw a musician get so infuriated with himself over a solo that he was cursing in between his own trumpet phrases !! Now that's self-expectancy.

'Flutter by, Butterfly' and 'Around 6' w/ Evan Parker and Eje Thelin are underrated classics.

Absolutely one of the sweetest and melancholy trumpet tones ever. In any music.