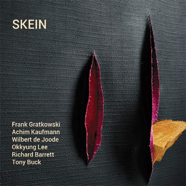 Sometimes it is a live experience that draws you into the music of a band, and sometimes it’s even the circumstances of the whole evening which influence the perception of the music.

When I went to see Achim Kaufmann (p), Frank Gratkowski (cl, as), Wilbert De Joode (b), and Tony Buck (dr) in Weikersheim/Niederstetten it was clear that I would be home late. It is a 120-mile-drive from where I live and I knew that I had to hurry to get there in time. Unfortunately, I was stuck in a traffic jam and the band had already begun to play when I arrived. I was stressed out and distracted because of the delay and I was even afraid if I would be able to concentrate and focus on the music. But after two minutes my worries were completely gone. The music took me away, I was enchanted by what I heard, there was no way to escape from the sheer perfection and enthusiasm presented by the musicians. But what does this have to do with this album?

The quartet I saw then is augmented by Richard Barrett (electronics) and Okkyung Lee (c) here, which puts the already great gang of four on an even higher level. Like huge flocks of birds flying in formations (Skein is therefore a perfect name for the band), they seem to have an invisible radar sending out signals which shows them what they have to do – it is intuitive understanding par excellence. If you compare pieces like “Schacht” and “Adze” you can see what these musicians are able to do. “Schacht” is like a mad and free expressionist dance consisting of a free jazz piano trio part and which takes a different shift when electronics and cello drop in. The tempo of the piece takes incredibly fast turns, the structures seem to glide from one part to the next– and all this is done effortlessly, out of the blue, as if it was the easiest thing to do. There are moments when Buck and Barrett build a fundament of dense, impenetrable and tight percussive rubble and Lee’s and De Joode’s bowing on the low registers of their instruments create a very dark and sombre atmosphere which can only partly be redeemed by the harsh alto and piano breaks that end the track. On the other hand there is the almost accessible “Adze”, a composition full of scratching string sounds, smacking, hissing, and knocking saxophone tones and steaming electronics which are contrasted by lost piano notes, elegant cello lines and Tony Buck adding percussion that sounds like the melodious ticking of a clock.

This is one of the best albums this year, it is music of an austere beauty, full of the energy and unpredictability of free jazz and the subtlety of new music textures. Or, as someone put it after the concert, when we were talking to the musicians: “After five seconds I knew this would be a great concert”. There’s nothing more to add.

The album is available on CD and you can buy it from the label.