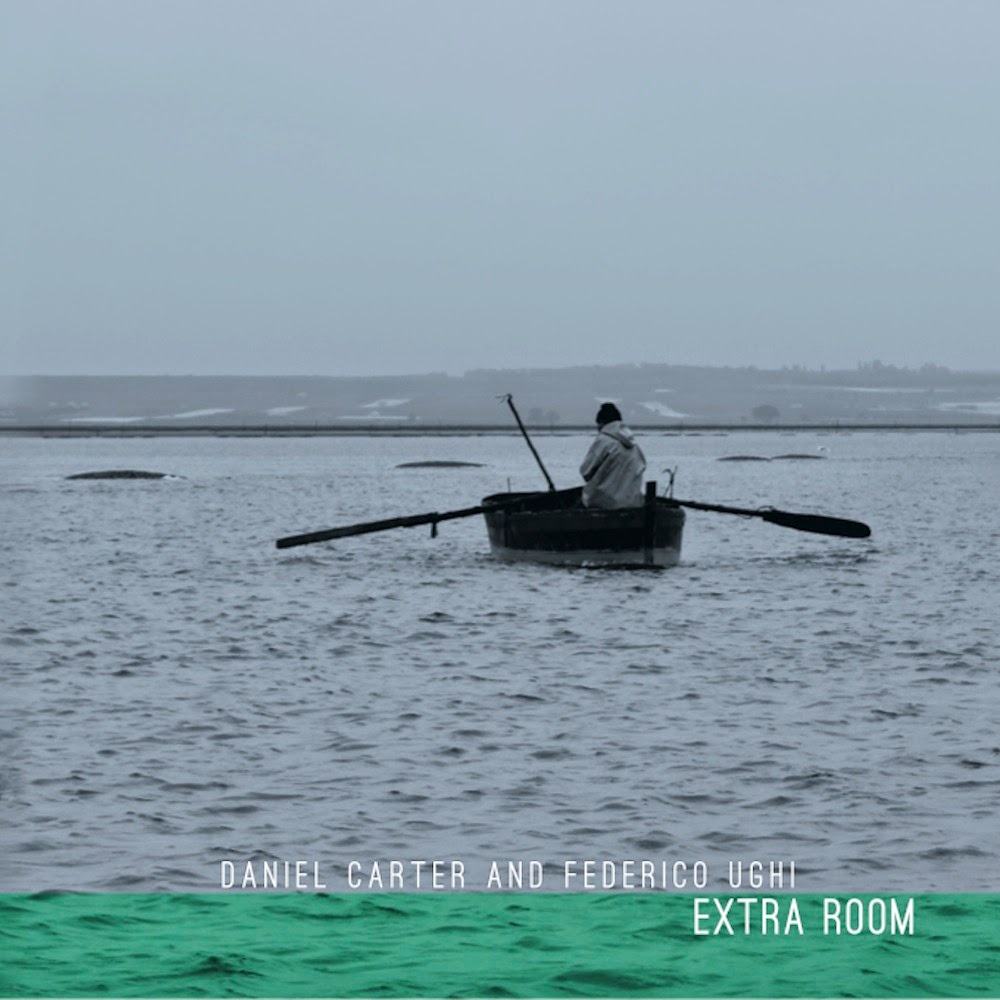 Already in the early days of this blog, my appreciation for Daniel Carter and Federico Ughi was clear, with their album "Mountain Path", but also "Nivesana", Carter's duo album with Ravi Padmnahavi got five stars then. The collaboration with the two men already goes back to 2001, with their debut album "Astonishment", also on 577 Records.

I like Carter's approach to music, which was already present in bands like Test and Other Dimensions In Music : the music of new possibilities, full of spirituality and introspection, an alternative that did not need volume or screaming at the top of your lungs to position itself, and coupled with a deep sense of pulse and the blues.

His specific sound and approach works extremely well with drummer Federico Ughi, who is a rhythmic lyricist, but then one who can hit hard when needed.

This new album, "Extra Room" is a double CD, with nineteen tracks in total, and you can hear on each piece that long-standing collaborations increase the quality of the music. The two artists play like one, regardless of whether Carter picks up his sax, his flute, his trumpet or is playing the piano.

The album starts with the beautiful "It's Got To Be Better Outside", a calm boppish and bluesy tune, warm and welcoming. The harmonious piano chords in the intro of"Extra Room", the title track, quickly evolve into dissonance, and when Ughi increases the tension, Carter picks up his tenor and both musicians play up a storm, in the best of free jazz mode, calming down again near the end. "Gypsy Drive" gives a mid-tempo flute and drums duet, a short hypnotic piece without much development, followed by the short meditative "Sweat It Out" on trumpet and drums. And it goes on like this, with lots of variation, lots of ideas, always captivating and the entire album offers an incredible amount of fantastic music, whether rhythmic delights such as "The Bouncer", the meditative beauty of "Light It Up Watch It Burn" or the final screamer "It's Still Got To Be Better Outside".

Apart from the splendid interaction between both musicians, the coherence and variation in the music, the album's best quality is the warm lyricism, the human authenticity and humility that shines through every track: these two artists are not here to demonstrate what they can, they're here to celebrate music. And who doesn't want to be part of that?

Good review Stef. The qualities you mention seem to typify much of what is produced by the - for want of a better term - free jazz musicians of the New York area. Nothing flashy, just the real thing.

Yes, good review and definitely made me interested in the release. I found some excerpts from the album on soundcloud: https://soundcloud.com/577records/daniel-carter-federico-ughi-extra-room-premiers-on-italian-public-radio