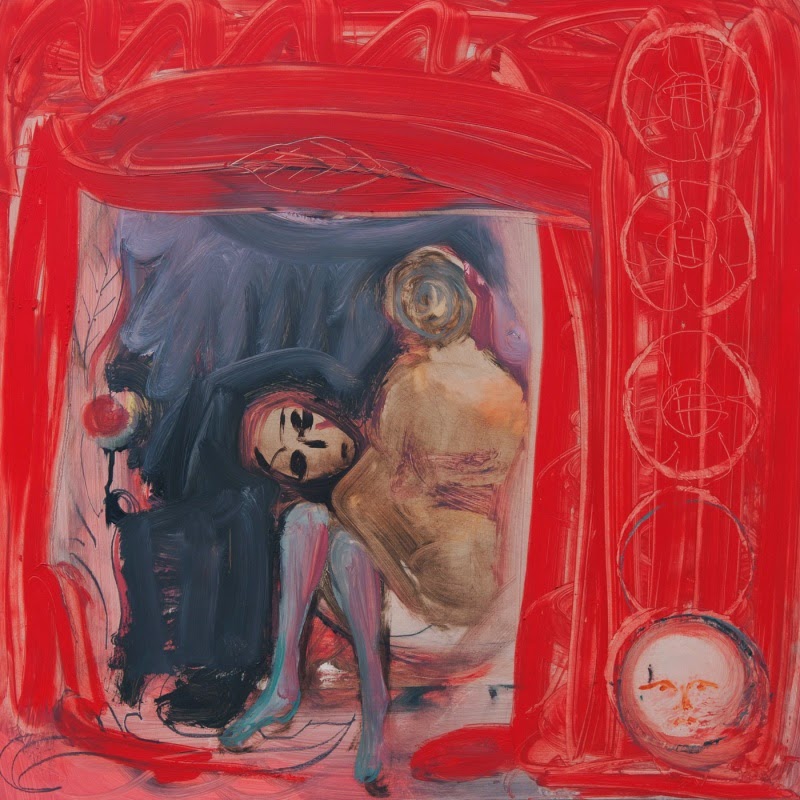 There are albums that one just stumbles upon, attracted by the cover art, musician lineup, or just by their name.  Death Shanties' Crabs is one example.  It is a crazy name for an improv group, but there you have it, a wild, free jazz duo of drummer Alex Neilson and saxophonist Sybren Renema (trio, if you include the artist Lucy Stein, whose paintings are projected while the duo are performing).

Neilson is known for his folk rock group Trembling Bells, and had led a free jazz group call Tight Meat.  Sybren Renema is a multimedia artist who not only works in the visual arts, but writes, and plays a mean saxophone.  Renema is clearly the star here, horn blazing front and center throughout the album, more Ayler than Brotzmann, but clearly references both, not as bitter but very lyrical.  What stands out in his playing is that on each track he is clearly telling a story, whether playing on the folk and blues influences that they claim to draw upon, or on the 60's ESP/Impulse! New Wave of Jazz vibe.  His playing is outstanding, and Neilson ably complements him without being heavy handed -- it is light at times, blazing at others, always smart in keeping things on an even keel.

The stand out track is "Baby Dodds is Dead," a ripping tune with Renema overdubbing himself, creating a sheer wave of sound while Neilson delivers some blistering percussion.  It is a spiritual tribute to the famed pre-big band era drummer, and it delivers the goods.  An oddity is the final track, "O, Where is Saint George!" which, quite frankly, feels out of place here,  DM Thomas' poem The White Hotel recited over a male chorus and jazz instrumental.  It just doesn't work.  Other good tracks are the opening track "Shadow Boxing with Crabs," "The Life of a Wave," and "Postcards from the Interior of a Star," all brilliantly played, evoking the 60's free jazz scene and breathing new life to it.  A solid album.