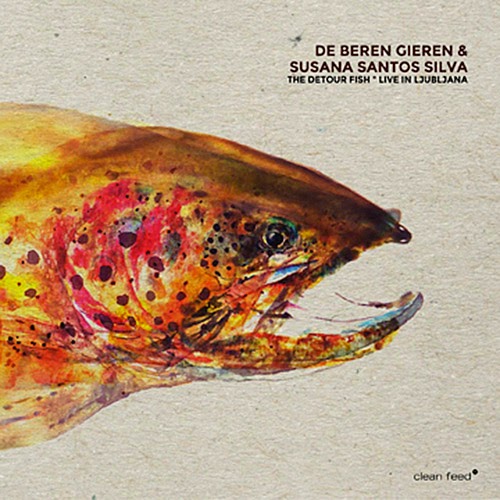 Yes, sometimes it takes time before good albums get reviewed. Some really good albums even get never reviewed at all!

Take this one for example, a young Belgian piano trio, called "De Beren Gieren" (Dutch for "The Bears Howl") with Fulco Ottervanger on piano, Lieven Van Pée on bass, and Simon Segers on drums, whose music is a fresh re-invention of the line-up,offering playful and light-hearted compositions with often minimal themes and quite intense improvisations.

For this album, they found a wonderful addition in Portuguese trumpeter Susana Santos Silva, capturing a performance at the Ljubljana Jazz Festival in 2014. Why is there a good match? Because they have a great gift of simplifying themes to their almost abstract essence, in combination with a great sense of pulse and intense group improvisations, while not running away from some structural complexities. The music's abstract and often sketchy quality makes it hard to describe, but it flows in a beautiful, almost organic way, often with a sense of wonder and surprise.

Even on "Weirs", the most avant-garde piece, led by Santos Silva's warm trumpet playing, the interaction works perfectly : the trio respects her introductory low growls, then gradually enters the scene with minimal arpeggiated sounds, and then follows the trumpet through agitated and dark tension. And the absolute beauty is that they do not overdo it. All four remain in full control and just give sufficient effort to create the sound, and nothing more.

Even if recorded in front of an audience, it appears to be absent, but that should not spoil the fun, because this band gives us a fascinating and unique musical vision, that's kept throughout the album with great coherence, and with lots of variation in the different pieces.