Garrison Fewell - Thanks for the great music 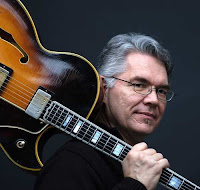 Today Garrison Fewell left us - a great musician and a great human being, as gentle, warm and precise in his music as he was in his everyday life. I never met him, but we were "friends" on Facebook and he kept us informed on his projects and travels. Musically, he is one of those incredibly skilled musicians who thought and worked a lot on technique, so that whatever he played seemed incredibly obvious, simple and accurate, even if it wasn't that obvious and simple, yet accurate and precise he always was. He was a teacher and educator, with some reference manuals for jazz guitarists published by him, and check out all his teaching videos on Youtube. I described him once as a 'coach' rather than a band-leader, someone who wanted to get the best out of other people, of other musicians, for the sake of the music, for the sake of beauty, with the result that his own contribution on the bands that he led, appear to be limited. I think that was his strength as an improviser, and maybe also as a human being and practising buddhist, to put your own ego in the background, to be part of a greater whole and contributing to life by leaving it a better place than when you arrived. Without a doubt he achieved this.

Our thoughts are with his family and close friends. He gave us some wonderful music and many great moments in life. May he rest in peace.

It is a pure coincidence that we reviewed two of his most recent albums today.

Here is an overview of his music as reviewed on our blog :

I can also highly recommend his other collaboration with John Tchicai and Charlie Kohlhase : Good Night Songs.

For once - a rare recording where Fewell is center stage - a more mainstream performance, yet highly enjoyable.